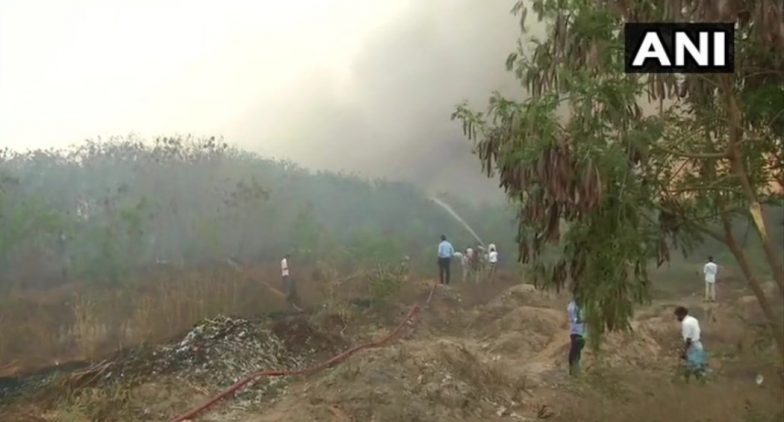 Koyambedu, May 13: A major fire broke out in a wasteland in Koyambedu belonging to Tamil Nadu's Chennai Metrowater triggered panic after the video of thick smog looming near Koyambedu bus stand on Monday afternoon went viral. According to reports, no casualties were reported in the incident. Operations are on to douse the fire. Mumbai: 6 Luxury Cars, Including Porsche & Mercedes, Gutted in Fire Near Mahalakshmi Railway Station.

According to Tamil Nadu Fire and Rescue officials, the dry grass in the empty land caught fire and spread rapidly. Seeing the smoke, a passerby alerted fire officials and four fire engines were pressed into action. The visuals were shared by news agency ANI, which also tweeted images of the rescue operations. Fire in Moving Car Near Chakala Metro Station in Andheri.

What's happening at Koyambedu!!! Massive billows of smoke.. Check out the video.. Video Courtesy: sent by a source. pic.twitter.com/LLfTA3mXv6

The fire officials told The Hindu that such incidents are common during summer. “It will take some time to bring the situation under control," said V. Ilangovan, station fire officers, J.J. Nagar. Meanwhile, earlier today, a car caught fire in Gujarat's Surat. The incident took place on Sardar bridge. According to reports, the fire is under control and traffic operations have been normalised.