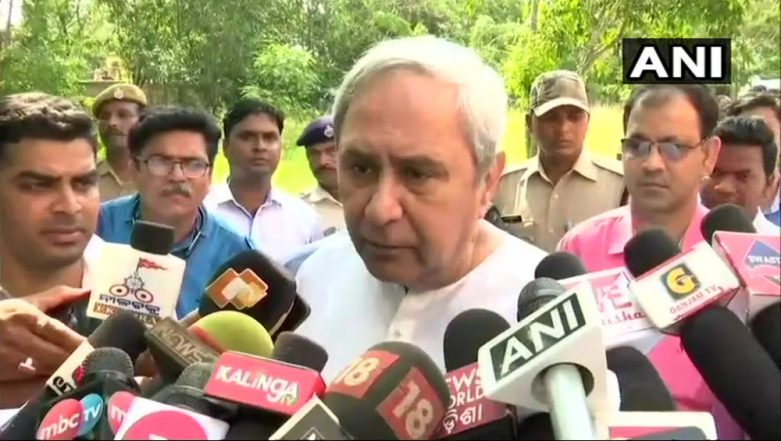 Bhubaneswar, October 28: Odisha Chief Minister Naveen Patnaik Sunday ordered an inquiry by the crime branch into the electrocution of seven elephants in Dhenkanal district even as one official was dismissed and six others were suspended by their departments in connection with the incident.

Six officials, three each from the Central Electricity Supply Utility (CESU) and forest department, were suspended and a junior engineer of CESU dismissed after the jumbos died after coming in contact with sagging live wire Saturday, an official said.

A general manager, one sub-divisional Officer (SDO) and a lineman of CESU were placed under suspension, while a junior engineer was sacked, an CESU official said. Similarly, a forest range officer, a forester and a forest guard were suspended for the incident, he said. Odisha: Seven Elephants Electrocuted to Death Near Kamalanga Village in Dhenkanal District.

"Besides ordering a crime branch inquiry into the incident, the chief minister has ordered appropriate action in case of any criminal negligence," an official in Chief Minister's Office said.

Seven jumbos, including a tusker and five females, were electrocuted as they came in contact with an 11-KV power line near Kamalanga under Sadar forest range.

The death of the elephants drew sharp criticism from the opposition parties with both the Congress and the BJP accusing the state government of "utter negligence".

BJP leader and Union minister Dharmendra Pradhan slammed the state government for the incident and claimed that earlier too several animals were killed due to lack of coordination between the forest department and the CESU under the energy department.

"It is a matter of regret that one hand of the state government is not aware of what the other hand is doing," Pradhan tweeted.

Senior BJP leader and former MP Rudra Narayan Pani also hit out at the government and sought resignation of both forest and energy ministers. He said both the energy and forest departments were "responsible" for the incident.

Blaming power authorities for the tragedy, Forest and Environment Minister Bijayshree Routray had on Saturday said the CESU had been warned about the matter long ago, but no corrective step was taken.

The PCCF said the mishap took place as the energy department failed to take step to raise the height of the high-tension wire, which was hanging much below the height stipulated by guidelines of the union government.

Energy Secretary Hemant Kumar Sharma said a three-member team was probing the incident and on the basis of their report, appropriate action would be taken.

The line acted as a temporary feeder for a railway construction site in the area where the incident took place, he said, adding that meetings between the forest and the energy departments were being held on a regular basis to ensure proper coordination.

Environmentalist and wildlife expert Biswajit Mohanty said there were 200 places in Dhenakanal district where high voltage electric wires were sagging at a low height and left unattended. Despite repeated letters to the CESU by the Forest department and stakeholders, nothing tangible has been done till date, he said.