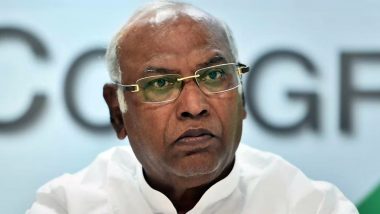 New Delhi, April 13 (IANS) The Congress on Wednesday attacked the Centre on the issue of inflation and leader of opposition Mallikarjun Kharge said inflation was at its highest in the last 17 months and the Prime Minister should withdraw his "Achhe Din" statement.

People of India have had enough of 'good times'.

"At 7%, Inflation is now highest in 17 months. I humbly request @narendramodi ji to immediately withdraw these 'Achhe Din'. People of India have had enough of 'good times'."

The Congress has been targeting the government on the inflation and has squarely blamed the government for the high prices. DGCA Restrains 90 SpiceJet Pilots from Flying Boeing 737 Max Till They Are Re-Trained Properly.

Many reports suggest that with higher food price pressure in the near term (summer effect, international prices, higher transport cost, supply chains) and persistent input cost pressure in the non-food segment, it now sees inflation crossing 6 per cent in FY23.

The Emkay Global Financial Services said in a report that March'22 inflation surged to near 7 per cent, reflecting a broad-based increase in food and non-food inflation. Perishable food items seem to have been hurt by higher transportation and fuel costs. "We are unlikely to see any relief in food prices in the near term, as supply-chain price pressure and summer months further weigh in," the report added.

Earlier, Congress leader Rahul Gandhi said, "The government should bulldoze inflation and unemployment but instead of that the BJP's bulldozer is driven by hatred to instill fear.

"Inflation and unemployment choked the people in the country and government should drive bulldozer on these problems but BJPs bulldozer is driven by hate to create fear."

(The above story first appeared on LatestLY on Apr 13, 2022 02:19 PM IST. For more news and updates on politics, world, sports, entertainment and lifestyle, log on to our website latestly.com).