The disbursement of funds collected from the taxes paid by the people is clearly written in the constitution, it is neither my money nor Manish Ji's money, it is the people's money. We have paid more than what is required to be paid as per the constitution. 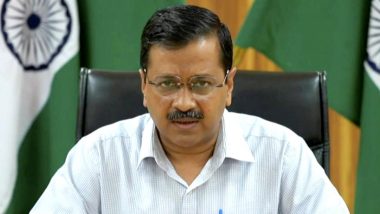 New Delhi, October 27: CM Arvind Kejriwal on Tuesday said that the protest of the doctors due to non-payment of their salaries by the MCDs is shameful and that the Central government should grant funds to the MCDs so that the salaries of the doctors and other unpaid staff can be released. He said that the MCD cannot run with such mismanagement and blatant corruption, and no party should play politics on such a sensitive issue. He said that since its formation in 2015, the AAP government has been paying two-three times more to the MCD than the previous governments, but the MCDs do not have funds despite getting their dues and a budget of Rs 12000 crores.

CM Shri Arvind Kejriwal said "The MCD doctors are on strike due to non-payment of salaries for many months now. This is utterly shameful. The doctors who risked their lives to protect, treat, and serve us and our families, this is not right. This is a very sensitive matter, and there should be no politics on the issue. Instead of playing politics on the issue, the motive should be that doctors should get their salaries. MCDs Are Putting Baseless Allegations Against Delhi Government for Lack of Funds, Says Satyendar Jain.

Since the last few years, we have been witnessing that MCD always tries to get out of paying the salaries to their staff, be it sanitation workers, teachers, doctors, etc. Why is there a lack of funds in MCD?"

"Some people say that the Delhi government has not paid its due. I asked all the officials, spoke to them, spoke to Delhi's Finance Minister who is here with us, and analyzed the entire situation. The disbursement of funds collected from the taxes paid by the people is clearly written in the constitution, it is neither my money nor Manish Ji's money, it is the people's money. We have paid more than what is required to be paid as per the constitution. It was Congress's government in 2013, and President's Rule in 2014.

Since our government was formed in 2015, we have paid two-three times more than what those governments paid before us when they were in power. Where did that money go? There were no new positions in MCD after 2013-14, and no increase in salaries of the MCD workers. But despite paying them two-three times more, where is the money going? Why are the sanitation workers, doctors, teachers not getting salaries?" he added.

He said, "Moreover, the MCD owes us Rs 3800 crores which were given in the form of loans to the MCDs by the Delhi government. They also owe Rs 3000 crores as bills to the Delhi Jal Board. The Central government gives grants to all municipal corporations across the country, based on Rs 485 per person.

However, the central government is not paying grants to the three MCDs for the last few years. The population of Delhi is 2.25 crore, and the per year calculation comes to Rs 1100-1200 crores per year according to Rs 485 per person, which amounts to Rs 12000 crores for 10 years. The Central government should be giving Rs 12000 crores to the MCDs, or how else will the MCDs function?"

CM Shri Arvind Kejriwal appealed to the officials to let the MCD function effectively. He said, "The MCD cannot run with such mismanagement and blatant corruption. Let me give you an example. I inaugurated the Seelampur-Shastri Park flyovers day before yesterday. It was to be completed in Rs 303 crore, but we completed it in 1.5 years in Rs 250 crores and saved Rs 53 crores. In the last six years, we have saved expenditure on all flyover projects in Delhi.

On the other hand, the Rani Jhansi flyover which was started in 2006 and was to be completed by 2010, but it took 14 years and got completed in 2018. The cost of the project was Rs 178 crores, but it took Rs 750 crores for the project. Where did the extra Rs 550 crores go? Due to this corruption and mismanagement, the MCD will be at a loss and the people will not want to pay taxes. The time has come to stop this corruption. People want to know, where is the money going? The budget for MCD is Rs 12000 crores, and the budget for salaries is Rs 6000 crores. If the MCDs get these funds, why can't they pay salaries to their staff? Why do the doctors then need to protest, when they should be treating our children and families in the hospitals?"

CM Shri Arvind Kejriwal said that the Delhi government is also suffering from an economical loss because it is the time of Corona, and so there is no tax collection. He said, "But still, we are managing the situation. We have not stopped the salaries of our workers until now and paying salaries to all our officials, teachers, doctors, workers on time. If the Delhi government had funds, I would have paid the salaries to MCD doctors irrespective of what is written in the constitution." Delhi CM Arvind Kejriwal Pitches For Free COVID-19 Vaccine Throughout India.

"I want to appeal to the Central government, the doctors are suffering because they have not gotten salaries for many months now. At a time of Corona, when we should be rewarding them with medals for being on Corona duties, they are not getting their salaries. The Central government should pay some amount from the Rs 12000 crores grant so that the salaries of the doctors can be paid. I also want to appeal to the MCDs to stop corruption," added the CM.