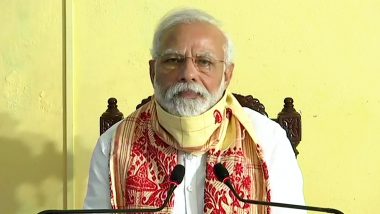 Kolkata, May 22: After conducting an aerial survey of areas affected by Cyclone Amphan in West Bengal, Prime Minister Narendra Modi on Friday announced a compensation of Rs 2 lakhs each to the kin of the deceased and Rs 50,000 each to the persons who got seriously injured due to Cyclone Amphan in parts of West Bengal. In his address, the Prime Minister noted that in the month of May last year, the country was busy with elections during which the nation had to combat a cyclone that battered Odisha. He added saying that this year, cyclone Amphan has affected the country's coastal areas, severely affecting people of West Bengal. A total of 80 people have died so far across the state due to Amphan cyclone.

The Prime Minister said the state and central governments stand with the people who have been affected by the super cyclone. During his address at West Bengal's Basirhat, the Prime Minister said a team will be stent by Central Govt to conduct a detailed survey about the damage caused due to Cyclone Amphan and the current situation of the affected areas. PM Narendra Modi And West Bengal CM Mamata Banerjee Conduct Aerial Survey of Areas Affected Due to Cyclone Amphan, Watch Video.

In the month of May, the country was busy with elections and at that time we had to combat a cyclone that battered Odisha. Now, after a year, this cyclone has affected our coastal areas. People of West Bengal have been worst affected by it: PM Modi on #CycloneAmphan pic.twitter.com/PGOosH84XS

Rs. 2 lakhs would be given to the next of kin of the persons deceased and Rs 50,000 each to the persons who got seriously injured due to #CycloneAmphan in parts of West Bengal: PM Modi pic.twitter.com/ZrSYAPKscG

"All aspects relating to rehabilitation & reconstruction will be addressed. We all want West Bengal to move ahead", PM Modi said. The Prime Minister said Rs 1000 crore allocated by central government for immediate assistance of West Bengal in the wake of Cyclone Amphan. "I assure my brothers and sisters of West Bengal that the entire country stands with you in these difficult times", the Prime Minister added. Cyclone Amphan Videos: Netizens Share Terrifying Footage And Images as Cyclonic Storm Wreaks Havoc in West Bengal.

Speaking on the situation in the wake of Cyclone Amphan. https://t.co/asWXOfFwff

(The above story first appeared on LatestLY on May 22, 2020 01:21 PM IST. For more news and updates on politics, world, sports, entertainment and lifestyle, log on to our website latestly.com).