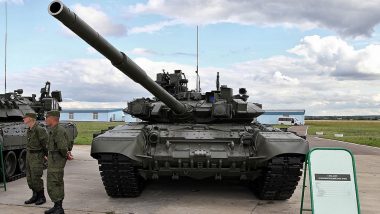 New Delhi, July 20: The Ministry of Defence on Monday signed a Rs 557-crore contract with state-run Bharat Earth Movers Limited (BEML) to procure 1,512 mine plough (MP) devices for the Indian Army’s main battle tank T-90. The deal will give a major boost to “Make in India” initiative of the Central government.

The Defence Ministry in the statement said, “The contract has Buy and Make (Indian) categorisation with a minimum of 50 percent indigenous content in make portion of the contract.” The deal was signed after the approval of Defence Minister Rajnath Singh. Indian Army to Induct 464 Russian Origin T-90MS Tanks to Deploy Along Pakistan Border.

These mine ploughs will be fitted on T-90 Tanks of Indian Armoured Corps which will facilitate individual mobility to Tanks while negotiating a minefield. The ministry added, “Mobility of Tank Fleet will enhance manifold, which in turn would extend the reach of Armoured Formation deep into enemy territory without becoming mine causality.” The induction of these 1,512 mine ploughs is planned to be completed by 2027.

In 2001, India purchased 310 T-90S tanks from Russia, of which 124 were delivered complete (42 featured the early cast turrets seen on Russian tanks), and 186 were to be assembled in the country. The T-90 is a third-generation Russian battle tank.

(The above story first appeared on LatestLY on Jul 20, 2020 09:27 PM IST. For more news and updates on politics, world, sports, entertainment and lifestyle, log on to our website latestly.com).