Delhi Chief Minister and AAP national convener Arvind Kejriwal on Thursday said his younger brother and Punjab Chief Minister Bhagwant Mann is getting married and embarking on a new journey. 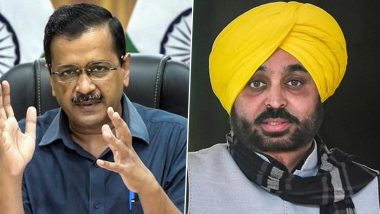 "My younger brother is getting married and embarking on a new journey. My best wishes to him," Kejriwal told the media on reaching the Chandigarh airport to attend a low-key wedding ceremony of Mann with Gurpreet Kaur, a doctor by profession, at his official residence in Chandigarh.

He shared a picture on Twitter with Mann, who can be seen in wedding golden attire donning a yellow turban.'

Bride Kaur, an MBBS degree holder from Maharishi Markandeshwar University in Mullana in Ambala district, is the youngest of three sisters. The elder ones are settled in the US and Australia.

Mann will get married a second time.

Only close family members, including Mann's mother, sister, and a few relatives and friends, will attend the wedding.

(The above story first appeared on LatestLY on Jul 07, 2022 12:47 PM IST. For more news and updates on politics, world, sports, entertainment and lifestyle, log on to our website latestly.com).