Having grown up on South Indian snacks like idli, and dosa, Mustafa decided to set up his own business - by selling these snacks with his cousins in 2006. They now ragi idli, dosa batter, rice rava, and idli batter, Malabar parotta, among other packaged snacks. 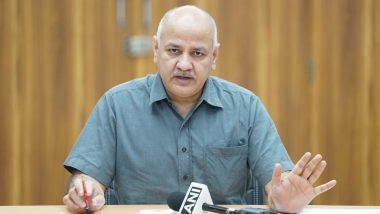 New Delhi, November 5: Entrepreneur PC Mustafa, CEO and co-founder of ID Fresh Food, that sells ready-to-eat packaged home food, inspired the students of Delhi government schools under the Entrepreneurship Mindset Curriculum today. While interacting with the students, he said, “The first step in achieving your dream is to write it down.”

Mustafa said, “I come from a beautiful but remote village of Wayanad. My father is not an educated man as he worked as a daily wage labourer. Times were so hard for us that having breakfast was a luxury so I used to walk 6kms to school just so I could have free meals at my government school.” Mustafa is now running a 1,500 crore worth business by selling Indian snacks like idli, vada and dosas to millions of Indians, and even to the US, Dubai and Abu Dhabi. ID Fresh Food, which was set up as a non-descript 550 sq feet shop, now boasts of over 21,000 stalls across the country. Diwali 2020: 'Don't Burst Crackers at Any Cost, Join Me for Live Laxmi Puja on November 14', Arvind Kejriwal Appeals 2 Crore Delhi Residents.

In the Q&A session with the students, on being asked about his decision to quit his corporate job, Mustafa said, “I wasted six years of my life working for other companies. I wish I'd started my business early. As Shri Sisodia mentioned earlier, creating jobs is not easy. I decided to quit my job to work on creating jobs, and we are now a team of over 1,500 people in four countries. I want to tell you students to not wait for tomorrow; instead start working on your ideas today.”

The students also asked him to share some of the challenges faced by him through the duration of his entrepreneurial journey. Mustafa shared that constantly innovating, especially to provide ready-to-eat perfect vadas for the masses, was a huge challenge. “It took us 3 years to perfect the recipe. We failed many times but it eventually paid off.”

Mustafa also advised the students to develop awareness so they can identify the customer problems in their surroundings, and then find solutions to fix those problems. “That’s the way you can become a successful entrepreneur. We’re selling something as simple as South Indian breakfast snacks. So, keep coming up with the ideas, no matter how simple they maybe”

Mustafa encouraged the students to adopt a ‘hustle’ life. Having worked with MNCs in Europe, and the Middle East, he says, hustling was ingrained in him thanks to his father who often picked up different jobs to sustain the family. This, he said, became the first lesson in his journey - to work hard to make more money. “Always be an honest entrepreneur, and never cheat your customers,” he added.

Having grown up on South Indian snacks like idli, and dosa, Mustafa decided to set up his own business - by selling these snacks with his cousins in 2006. They now ragi idli, dosa batter, rice rava, and idli batter, Malabar parotta, among other packaged snacks.

However, Mustafa wasn’t a born-entrepreneur. Having failed his 6th grade, he dropped out of his government school for months discouraged by the result. He said, “But I learnt from my failure and decided to focus on one subject, math, and even emerged as the class topper. That gave me and my teachers confidence to invest in me.” This, Mustafa told the students, is the way forward - to focus on small successes to inculcate self-confidence.

Mustafa then pursued his engineering from the National Institute of Technology (NIT) in Calicut and also has an MBA from Indian Institute of Management (IIM) in Bengaluru. After working in the MNCs in Europe and Middle East, Mustafa said that he quit his well-playing corporate job to start his own business in India. Diwali 2020: Delhi Govt Will Organise and Livestream Lakshmi Puja on November 14 at 7.39 PM, Says CM Arvind Kejriwal.

Sharing a motivating anecdote with a student who wanted to know how she can become an IPS officer, Mustafa narrated a story of a young student he met who dreamt of becoming a doctor, and decided to add Dr in front of her name outside her house. “I met her 8 years ago, and she’s a doctor now. So if you want to achieve your dreams and become successful, write it down first.”

The successful Live Entrepreneur Interaction was organised by SCERT, Delhi under the Entrepreneurship Mindset Curriculum (EMC) in Delhi government schools. So far, 12 sessions have been organised. Prior to the lockdown, these sessions were organised in schools, but since March have been taken online. Through this course (EMC), efforts are being made to create a mindset amongst students between classes 9 to 12 - as they get an opportunity to engage with the best entrepreneurs in India.

Delhi Deputy Chief Minister and Education Minister Manish Sisodia lauded these sessions that give the students a golden opportunity, and access to engage with such hugely successful entrepreneurs, and learn from them. Sisodia said, “Because of Corona, schools and classes have now shifted online. But it’s a blessing in disguise as now all students of govt schools in Delhi have the opportunity to interact, and tune into these sessions. The curriculum runs smoothly, despite the crisis.”

On Mustafa, and his exceptional journey from a young village boy to a highly successful entrepreneur, Sisodia said that the session should inspire the students. “Despite dropping out of school after failing in 6th grade, with the support, and guidance of his teachers, Mustafa got back on the track, and is now such a big name in the food industry of India.” Delhi Air Pollution: Arvind Kejriwal Bans Manufacturing Activity in New Industrial Areas; Only Hi-Tech, Services Industries Permitted.

Become a change-maker, Sisodia said, while referring to Mustafa’s enterprising mindset. While addressing the students, Sisodia said, “You can co-relate to him. He, too, comes from humble beginnings having studied in a government school himself. His father was a daily wage labourer. But despite these financial constraints, Mustafa turned his weaknesses into his strengths.

"Whether you aspire to get a job in the future, or set up your business, it's important that you do everything with a fearless attitude. Mustafa, just by selling idlis, has a business turnover of over thousands of crores now. It’s not a small thing, that the child from a government school is now employing the youth of India.”