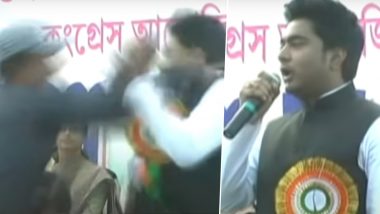 Kolkata, June 18: Devasish Acharya, who slapped Trinamool Congress (TMC) leader Abhishek Banerjee in 2015, has died under mysterious circumstances. Unidentified men brought Devasish Acharya to a hospital where he died yesterday, according to reports. His family has alleged that Devasish had been murdered. Police have launched an investigation. Abhishek Banerjee, Mamata Banerjee's Nephew, Appointed National General Secretary of TMC.

According to a report by India Today, Devasish, who joined the Bharatiya Janata Party (BJP) last year, was dropped at the Tamluk district hospital in Midnapore on Thursday morning. The hospital records show Devasish was brought to the facility at 4:10 am by some unknown men, who left after dropping him there. He was severely injured and died in the afternoon, the report said. TMC MP Abhishek Banerjee Defends Alapan Bandyopadhyay, Claims All Political Parties Violated COVID-19 Norms During Elections.

Devasish's family was informed after his death at the hospital. During initial probe, police found that Devasish had gone out with two of his friends on June 16 evening. The trio had a halt at a tea stall near the Sonapetya Toll Plaza. The India Today report said this is when Devasish received a phone call and left his friends at the tea stall. Cops are now investigating what happened after he left the tea stall.

Devasish slapped Abhishek Banerjee, the nephew of West Bengal Chief Minister Mamata Banerjee, during an event in 2015. Immediately after the incident, TMC workers thrashed him and he was left grievously injured. He was booked under sections 307 (attempt to murder), 447 (criminal trespass), 323 (voluntarily causing hurt) and 506 (criminal intimidation) of the Indian Penal Code and arrested.

Abhishek Banerjee then said that he had forgiven Devasish and requested cops to release him. Devasish's family had then claimed that he was mentally unsound. TMC workers who assaulted Devasish were also booked by the police.

(The above story first appeared on LatestLY on Jun 18, 2021 11:57 AM IST. For more news and updates on politics, world, sports, entertainment and lifestyle, log on to our website latestly.com).