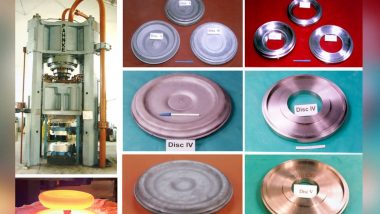 India has been constantly working on its aero-engine technology and DRDO is leading from the front. Recently, in a technological breakthrough, Defence Metallurgical Research Laboratory (DMRL), a metallurgical laboratory of DRDO at Hyderabad has developed a way to produce critical aero-engine components. The technology is hard to achieve as a country like China is also struggling to develop cutting-edge technology that can fuel aircraft engines.

DRDO has created a near isothermal forging technology to produce aero-engine components using its unique 2000 MT isothermal forge press. The components include all the five stages of high-pressure compressors (HPC) discs which are used in aero-engines. They are made up of difficult-to-deform titanium and nickel-based alloys. Titanium and nickel-based alloys can withstand temperatures of more than 1,000 degrees Celsius. Alloys are a mixture of two metals in a fixed proportion to give strength to the metals. Aero India 2021: Hindustan Aeronautics’ Light Utility Helicopter for Indian Army Gets Initial Nod.

This development enables India to power its jet engines indigenously

The production of aero-engines components such as high-pressure compressors (HPC) discs through the isothermal forging technology has put India in the league of limited global engine developers in the world, who have the manufacturing capabilities of such critical aero-engine components.

Along with MIDHANI, Defence Metallurgical Research Laboratory (DMRL) has produced 200 HPC disc. The discs have been supplied to HAL’s Engine Division in Bengaluru for installation in the Adour 804/811 and 871 engines that runs the Indian Air Force’s Jaguar/Hawk Aircrafts.

What is isothermal forging technology?

In metallurgy, the process of Forging is termed as shaping metal and increasing its strength by hammering or pressing. Forging has different types, among them is isothermal forging technology. In Isothermal forging, the die and the workpiece are maintained at the same temperature throughout the forging cycle. This technology is widely used to forge titanium-based alloys. That is why this technology is best suited for the high-pressure compressors (HPC) discs that are used in aero-engines.

The fighter jet engine needs components with the highest precision, as a small deformity can lead to huge damage. The isothermal forging technology provides the components with the highest precision. The components produced through the technology are very close to the final (net) shape, reducing the need for surface finishing. More than two-thirds of the production cost is reduced by eliminating traditional finishing processes like machining or grinding.

DRDO’s technological breakthrough has put India on the world platform to create high-end technology in the defense sector. This will further open doors for the nation to build a completely indigenous aircraft.

(The above story first appeared on LatestLY on May 31, 2021 05:02 PM IST. For more news and updates on politics, world, sports, entertainment and lifestyle, log on to our website latestly.com).