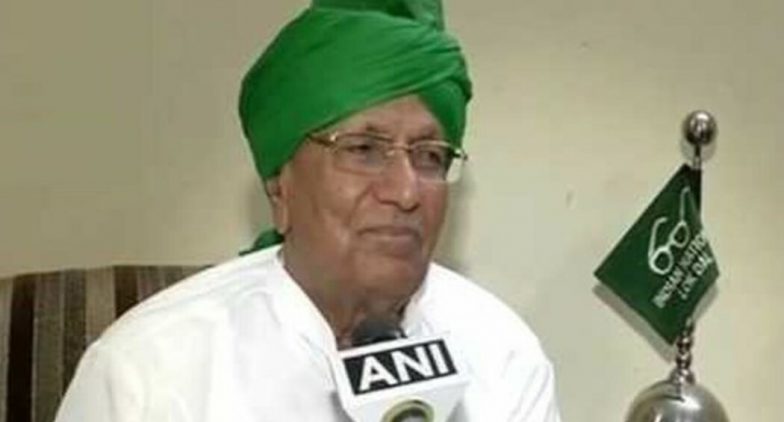 New Delhi, May 17: The Enforcement Directorate (ED) on Friday has provisionally attached the property worth nearly Rs 2 crore of former Chief Minister of Haryana Om Prakash Chautala on the charges of money laundering. The property consists of land and a farmhouse in New Delhi worth Rs 1,94,52,347, said officials and was attached under PMLA (Prevention of Money Laundering Act). ED Attaches Former Haryana CM O P Chautala's Properties Worth Rs 3.68 Cr in DA Case.

Chautala, who is currently in prison serving a jail term in teachers recruitment scam, is being probed by CBI (Central Bureau of Investigation) and ED for disproportionate assets more than Rs 6 crore. The ED initiated an investigation on the basis of FIR registered by CBI and a chargesheet filed against 84-year-old Indian National Lok Dal (INLD) leader and his sons Abhay Chautala and Ajay Chautala under sections of IPC and the Prevention of Corruption Act (PCA) 1988.

Enforcement Directorate (ED) has provisionally attached, immovable property which consists of land&farm house located in New Delhi worth Rs 1,94,52,347/- of former Haryana CM, Om Prakash Chautala under PMLA in connection with a corruption case. Further probe is on. pic.twitter.com/RQ21UWiLHs

"The CBI investigation revealed that Om Prakash Chautala acquired assets disproportionate to his known source of income to the tune of Rs 6 crore between May 24, 1993, and May 31, 2006," the agency said. INLD Seeks Home Ministry Probe into Cancellation of O P Chautala's Parole.

CBI raids found that Om Prakash Chautala had properties in New Delhi and Panchkula and also his house in Haryana's Sirsa was constructed from the money received from the undisclosed sources. The investigations also revealed that the 84-year-old leader was involved in acquiring and projecting various tainted properties as his untainted properties.

His sons Abhay and Ajay also acquired assets disproportionate to their known source of income to the tune of Rs 119  crore and Rs 27.74 crore respectively. "During investigation conducted under the PMLA, it was revealed that Om Prakash Chautala acquired immovable properties in New Delhi, Panchkula and even constructed a house in Sirsa (Haryana) between May 24, 1993, and May 31, 2006, from the money received through undisclosed sources," the agency said.