If a woman is having extramarital affair, it does not mean she is a bad mother and cannot be granted custody of her child, observed the Punjab and Haryana High Court recently. 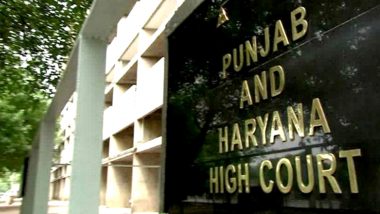 Chandigarh, June 3: If a woman is having extramarital affair, it does not mean she is a bad mother and cannot be granted custody of her child, observed the Punjab and Haryana High Court recently. The observation was made during a hearing on a habeas corpus petition filed by a woman from Fatehgarh Sahib, in Punjab, who is now an Australian citizen. The woman sought custody of her four-and a-half-year-old daughter who was taken away by her father. ‘Live-In Relationships Not Acceptable Morally or Socially’: Punjab and Haryana High Court Issues Order After Unmarried Couple Seeks Protection for Life and Liberty.

"…in a patriarchal society, it is fairly common to cast aspersions on the moral character of a woman. More often than not these allegations are made without any basis or foundation. Even assuming a woman is or has been in an extramarital relationship, the same by itself cannot lead to the conclusion that she would not be a good mother to deny her the custody of her child," Justice Anupinder Singh Grewal observed.

According to a TOI report, the woman informed the court that she had got married in 2013. Her husband, a native of Ludhiana, was an Australian citizen, and she later joined him in Australia. The couple had a daughter in June 2017. 'Wife is Entitled to Increase in Alimony After Divorce, if Husband's Salary Increases': Punjab and Haryana High Court.

The report said later differences emerged between the woman and her husband. The petitioner told the court that they had arrived in India in January this year. On February 2, 2020, when she had gone to her parental village, her husband took away her daughter, she said. Asserting that extramarital affair doesn't make a woman bad mother, the court granted the woman custody of her daughter.

(The above story first appeared on LatestLY on Jun 03, 2021 12:31 PM IST. For more news and updates on politics, world, sports, entertainment and lifestyle, log on to our website latestly.com).