United Nations Human Rights Chief Michelle Bachelet on Friday called for meaningful talks between government and farmers. Michelle Bachelet said that the continuing farmers’ protests in India against three farm laws highlighted that legislation should be based on meaningful consultations with stakeholders. 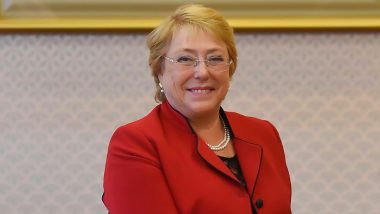 Geneva, February 26: United Nations Human Rights Chief Michelle Bachelet on Friday called for meaningful talks between government and farmers. Michelle Bachelet said that the continuing farmers’ protests in India against three farm laws highlighted that legislation should be based on meaningful consultations with stakeholders. The UNHRC Chief made these remarks while speaking at the 46th session of the Human Rights Council.

“In India, continued protests by hundreds of thousands of farmers highlight the importance of ensuring laws and policies are based on meaningful consultations with those concerned,” Bachelet said in her address,” reported Hindustan Times quoting the UN High Commissioner for Human Rights as saying. Farmers' 'Chakka Jam' Protest Draws Response in Punjab, Haryana, Rajasthan; Scattered Demonstrations in Other States.

Notably, the session was also addressed by India’s Foreign Affairs Minister S Jaishankar. India hit back at Bachelet over her remarks. IM Pandey, Permanent Representative of India, said that the Centre had shown utmost respect for protests by farmers and had remained engaged in dialogue with them to address their concerns.

Pandey stated that objectivity and impartiality have to be hallmarks of any Human Rights assessment and the High Commissioner’s oral update lacked in both. He added, "Unprovoked violence on our Republic Day in name of farmers’ rights, apparently, left her unmoved. Her indifference to terrorism is, of course, not new."

GoI has shown utmost respect for protests by farmers & has remained engaged in dialogue with them to address their concerns: Ambassador IM Pandey, Permanent Rep of India, Geneva during General Debate on Oral Update of High Commissioner at 46th Session of Human Rights Council pic.twitter.com/aNRohsH5LK

It was the second time, when the UN Human Rights Commission commented on the farmers’ protest. Earlier this month also, the commission asked the Indian government and protesters to exercise maximum restraint in the ongoing farmers’ protest.

Bachelet even said that charges of sedition against journalists and activists for reporting on protests and curb freedom of expression on social media were “disturbing departures from essential human rights principles.” She even said that UNHRC is continuously monitoring the situation in Jammu and Kashmir. She also expressed concerns over the internet issue in -Pakistan Occupied Kashmir.

Notably, farmers are protesting against the three farm laws since November 26. They are camping at Delhi borders. Farmers, especially from Punjab and Haryana, fear that the new laws would dilute the Minimum Support Price (MSP) by destroying APMCs. Till now, 11 rounds of meeting between farmers’ unions and the Centre have taken place. Farmers are demanding that laws should be repealed, while the Centre is offering only amendments in the law.

(The above story first appeared on LatestLY on Feb 26, 2021 10:34 PM IST. For more news and updates on politics, world, sports, entertainment and lifestyle, log on to our website latestly.com).