Garrett Boorjian: Absolutely, Florida is one of the key states that’s welcoming Silicon Valley-based tech companies with open arms. South Florida is competing with NYC, Texas, North Carolina and overseas in tech job relocation and creation during the pandemic. 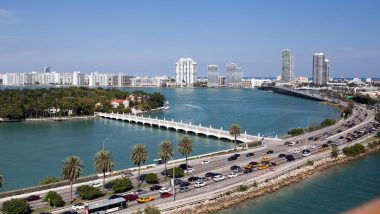 As Florida increasingly becomes an emerging hub for the relocation of tech companies, it’s also producing a tidal wave of new activity for investment banking and fundraising in the Sunshine State. The past year saw a sharp uptick in companies leaving pricier, higher-tax markets such as New York and California and seeking out Florida’s warm climate, low cost of living and favorable tax environment. As those tech companies attract new venture capital and investors to the state, local financial firms and investment banks are seeing a ramp up in activity.

WaveCapital Partners, a Florida-based investment banking consultancy that serves clients in technology, among other industries, has seen firsthand some of the center of gravity for capital markets begin to shift towards Florida over the past year. The firm’s managing partner, Garrett Boorojian, is advising an increasing number of Florida tech companies who are raising capital from investors who are eyeing the state’s growing tech market. Garrett shared insights with us on the shifts taking place in Florida’s economy and the investors who are looking to deploy capital there.

Have you seen an increase in tech companies, especially those relocating from other cities, popping up in the Florida market?

Garrett Boorjian: Absolutely, Florida is one of the key states that’s welcoming Silicon Valley-based tech companies with open arms. South Florida is competing with NYC, Texas, North Carolina and overseas in tech job relocation and creation during the pandemic. Billionaire investors and rising entrepreneurs have transitioned to the Greater Miami area, a place where it’s already a major financial banking center. Tampa and Orlando are other major markets that are benefiting by tech jobs relocating from the West Coast.

Are there any specific areas of tech that are particularly growing?

GB: Tech that encompasses the aspects of finance, consultancy, life sciences, real estate, and artificial intelligence through NASA are the driving forces in Florida’s growing tech economy. Major companies, such as Oracle, KPMG, Lockeed Martin, Deloitte, and Goldman Sachs are visible icons in the state. An abundance of venture capital has been raised and deployed in Florida and its major universities are taking the necessary steps to educate their students to meet this unprecedented tech demand.

Have you seen an uptick in interest among investors in pursuing Florida-based deals? Are they local or based in other hubs like NYC and SF?

GB: I’ve definitely seen an uptick because I talk to investors constantly who see how Florida has responded exceedingly well to bring employment opportunities in tech and finance to its state during the pandemic. From my perspective, more investors have originated from New York, San Francisco and abroad because they’re enjoying Florida’s no state income tax and adapting quickly to the affordable living costs in the midst of more advantageous environmental and political conditions.

What could that mean for the current hubs of financing that are NYC and Silicon Valley?

GB: NYC and San Francisco investor hubs will not completely evaporate and go elsewhere. Tech companies are still having their employees work and learn for training purposes remotely, so they don’t have to fully be inclined to move into brick and mortar locations in South Florida. Investors are also mindful of the need for more innovative solutions to Florida’s public transportation system to accommodate the tech boom in the long run. Putting their investment dollars to work in the infrastructure space will create tech jobs as well.

Are there any investor advantages to investing in or lending to Florida companies specifically?

GB: Of course, the reports I’ve read indicate how receptive Miami’s Mayor Francis Suarez is to encouraging tech investors to embrace his city. Investors and city officials across the state are working together to make Florida the next Silicon Valley. Whether it’s SoftBank’s $100 million tech investment in Miami’s start-up businesses, or Bill Gates and Jeffrey Vinik spearheading the roughly $3 billion investment into Tampa’s Water Street development project, public and private leaders are mutually working together to create a major economic advantage for these cities.