A 30-year-old woman and her eight-month-old son were set on fire allegedly by her husband in Methan village in Jamnagar district of Gujarat. 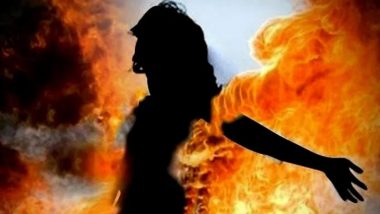 Jamnagar, October 12: A 30-year-old woman and her eight-month-old son were set on fire allegedly by her husband. The incident took place in Methan village in Jamnagar district of Gujarat on October 10. The accused, identified as Naresh Marwadi, was arrested on October 11. He allegedly set his wife Bhavna Marwadi and son Ranjit ablaze following a domestic dispute. Naresh is Bhavna's second husband. Gujarat: 28-Year-Old Woman Sets Self And Two Minor Sons On Fire in Rajkot DIstrict After Argument With Mother-In-Law.

Naresh and Bhavna had tied the knot four years ago. In her complaint, she said on October 10, Naresh alleged that she was not taking proper care of their son. He reportedly told her that he no longer loved her and a heated argument had started between the couple. After some time, Bhavna went into the kitchen with her son and started cooking food on the stove. Bhopal Shocker: Woman Allegedly Sets Herself on Fire After Fight With Neighbour.

According to Bhavna, she was cooking food with the baby in her arms when Naresh poured kerosene on her and set her ablaze. The fire engulfed Ranjit too. She screamed for help and one of her neighbours, Ramesh Marwadi, rushed to rescue her. Ramesh managed to douse the fire and rescued Bhavna. He also suffered burn injuries. Meanwhile, Naresh saved his son.

Both Bhavna and her son and Ramesh were taken to Jamnagar civil hospital. Bhavna is undergoing treatment for severe burns, while Ranjit survived with minor burns. The mother-son duo is stable. The police recorded Bhavna's statement in the hospital and arrested her husband Naresh for allegedly trying to kill her and her son.

(The above story first appeared on LatestLY on Oct 12, 2021 02:11 PM IST. For more news and updates on politics, world, sports, entertainment and lifestyle, log on to our website latestly.com).