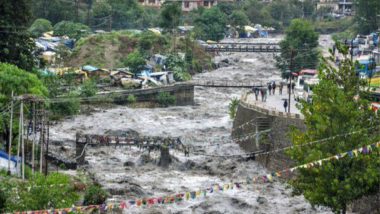 Shimla, September 25: The group of 50 trekkers who had gone missing in Lahaul-Spiti in Himachal Pradesh on Monday are safe, said Himachal Pradesh Chief Minister Jairam Thakur on Tuesday. Amid heavy rains across the state and snowfall in higher areas including Leylong, the group of trekkers including 35 IIT Roorkee students had gone missing in the Sissu area of Lahaul-Spiti yesterday.

The students had gone for trekking to the Hamata trekking pass in Kullu. Rajvir Singh, father of one of the students Ankit Bhati, had said that the students were supposed to return to Manali, but had lost contact on Monday. Amid Heavy Downpour, MeT Forecasts More Rains.

Meanwhile, over 800 students along with their teachers, who had gone to Chamba district and were stranded in the Holi area of Bharmour, were also reported to be safe. The students had gone to participate in a school competition in Chamba. North India Rains: Rainfall Wreaks Havoc; Death Toll Jumps to 25 as Floods, Landslides Hit J&K, Punjab, Haryana & Himachal Pradesh.

Heavy rains have wreaked havoc in Himachal Pradesh over the past three days, with the Beas river swelling. All government and private schools and colleges in Sirmur, Shimla, Chamba, Mandi, Kullu, Sirmaur, Kangra, Hamirpur, Solan and Kinnaur districts have been directed to remain shut till the situation improves.

On Sunday, the Kullu district experienced cloudburst and incessant rain, which was followed by waterlogging in many districts. The flow of the water in Beas river was so intense that heavy vehicles including a truck and a tourist bus were washed away. Himachal Pradesh and Uttarakhand Witness Heavy Rain and Snowfall, Vehicles Washed Away in Beas River; Watch Video

At least five deaths have been reported in Himachal Pradesh amid heavy rains as the Beas river was overflowing and flash floods hit several areas.

(The above story first appeared on LatestLY on Sep 25, 2018 12:30 PM IST. For more news and updates on politics, world, sports, entertainment and lifestyle, log on to our website latestly.com).