According to doctors, the change in temperature is the cause of all the ailments. Reports inform that out of the infected ones in the city, 10-20% are infected with viral flu. 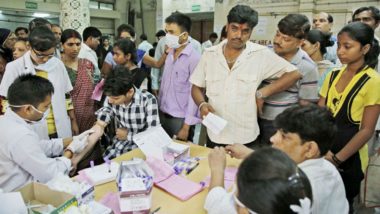 Hyderabad, October 14: There has been a sharp rise in the number of viral fever, dengue, chikungunya and influenza cases across Hyderabad. According to a tweet by ANI, the hospitals in the city have seen a sudden spike in such cases. According to doctors, the change in temperature is the cause of all the ailments. Reports inform that out of the infected ones in the city, 10-20% are infected with viral flu.

This ailment season is believed to remain the same till January, when the temperature drops. According to ANI, the doctors informed that in September, they received 20 positive dengue cases while in October, 10 positive cases were reported so far. Meanwhile, 20-30 malaria cases were reported in the last two months. Reports inform that despite fogging being conducted in the city,  there is no respite for the people from mosquitoes. Dengue Grips North India: 233 Cases Reported in a Week, 100 in Delhi Alone.

Meanwhile, Telangana is also witnessing a rise in the cases of dengue, malaria, swine flu and viral fever. Speaking to ANI, Dr Shankar, Director Institute of Preventive Medicine, said, “In Fever Hospital, the cases have increased from 1000 to 1400. Out of 1400, 20 per cent cases are of viral flu. Last month 20 cases of dengue were reported and this month 10 dengue cases have been reported positive so far.” Expert Tips To Stay Protected From The Vector-Borne Disease.

Hospitals in Hyderabad see rise in cases of viral fever, dengue, chikungunya&influenza. Doctor says 'Change in temperature is the cause. Out of all 10-20% are of viral flu.Last month we received 20 positive dengue cases&10 this month.20-30 malaria cases reported in last 2 months' pic.twitter.com/EIxGDXGclq

Meanwhile, in Rajasthan, the number of Zika patients in Jaipur rose to 51. Of the total 51 patients who have tested positive for the Zika virus, 11 are pregnant women, sources at the Union Health Ministry said.  Fogging and other anti-larvae activities are being carried out in the Shastri Nagar area to prevent the spread of the virus. According to reports, the first case of Zika Virus came to light on September 22 when an 85-year-old woman with no travel history tested positive for the disease.

(The above story first appeared on LatestLY on Oct 14, 2018 04:42 PM IST. For more news and updates on politics, world, sports, entertainment and lifestyle, log on to our website latestly.com).