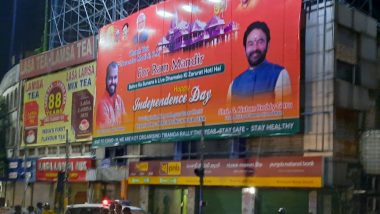 Hyderabad, August 11: The Hyderabad police has removed a controversial banner with provocative writing from a busy traffic intersection in the city after its display went viral on social media. The banner was put up by an organization called Bhagat Singh Yuva Sena at Moazzam Jahi Market crossroads in the heart of the city. It was installed by one Laddu Yadav to thank Prime Minister Narendra Modi for the Ram temple in Ayodhya and for Independence Day greetings. It carried pictures of the Prime Minister, Union Minister of State for Home G. Kishan Reddy, BJP MLA Raja Singh and Laddu Yadav. However the writings on the hoarding were provocative.

Majlis Bachao Tehreek (MBT) leader Amjedullah Khan had raised strong objection to the silence of the authorities over the controversial banner saying this could vitiate the atmosphere in the city and disturb peace and communal harmony. Hyderabad Police Arrest Fake Plasma Donor For Cheating People by Posing as COVID-19 Recovered Patient.

I have put up this banner at MJ Market #Hyderabad which was removed by police under the pressure of #AsaduddinOwaisi party @aimim_national and some small time leader from old city. https://t.co/QrRRxvxqEp pic.twitter.com/u4QmfwYkoc

Khan alleged that the Hyderabad police which was very harsh in dealing with protests by Muslim organizations over various issues was silent and soft towards the RSS and pro-Hindutva elements. He cautioned that this attitude may lead to communal disturbance in Telangana during the upcoming Muharram and Ganesh festival.

Khan tweeted to Industries Minister K. T. Rama Rao, director general of police and Hyderabad Police Commissioner drawing their attention to the provocative hoarding. Activist Syed Abdahu Kashaf also lodged a complaint with the police and sought booking of cases against Raja Singh, Kishan Reddy and others for spreading hatred.

Police acted late Monday night to remove the hoarding. Laddu Yadav reached there to lodge his protest over police action. However, the police team led by Assistant Commissioner of Police Bhiksham Reddy completed its task. Both Amjedullah Khan and Kashaf thanked the Hyderabad Police Commissioner Anjani Kumar for his swift and timely action in removing the provocative banner.

(The above story first appeared on LatestLY on Aug 12, 2020 12:09 AM IST. For more news and updates on politics, world, sports, entertainment and lifestyle, log on to our website latestly.com).