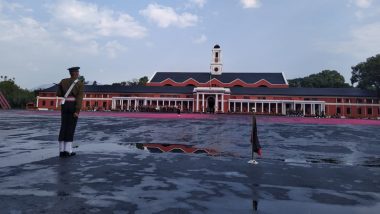 Dehradun, December 12: The passing-out-parade (POP) of the Indian Military Academy (IMA), for the Autumn Term, was held in Dehradun on Saturday under COVID-19 protocols. The ceremony was reviewed by Vice Chief of Army Staff, Lt General S K Saini. A total of 325 Gentlemen Cadets (GCs), including 147 of Regular Course and 130 Technical Graduate Course, successfully passed out.

Out of the 325 GCs commissioned into the Indian Army, the maximum are from Uttar Pradesh. A total of 50 cadets from India's most populous state joined the armed forces, followed by 45 from Haryana, 32 from Bihar and 24 from Uttarakhand. Col Prithipal Singh Gill, The Only Man to Serve Indian Army, Air Force, And Navy, Turns 100.

From Punjab, a total of 15 cadets passed out. 18 cadets from Maharashtra, 12 from Madhya Pradesh, 11 from Jammu & Kashmir and 10 from Himachal Pradesh were also commissioned into the forces.

State-Wise List of Cadets Commissioned Into the Indian Army

#WATCH Uttarakhand: Cadets commissioned into Indian Army as officers, celebrate after passing out parade of the 2020 batch at Indian Military Academy in Dehradun. pic.twitter.com/fOcRu50E65

Apart from the GCs commissioned into the Indian Army, a total of 70 cadets from friendly foreign countries also passed out from the IMA. The maximum among them are from Afghanistan (41), followed by Bhutan (17) and three each from Vietnam and Tajikistan.

“I am sure, you as ambassadors of your country carry back a treasure of fond memories of IMA and training which you shall cherish for a lifetime. The Indian Military Academy has imparted training to which will form the bedrock for your growth, both professional and personal, and will definitely strengthen the ties between our countries," Lt Gen Saini, the Reviewing Officer, told the foreign cadets.

(The above story first appeared on LatestLY on Dec 12, 2020 01:43 PM IST. For more news and updates on politics, world, sports, entertainment and lifestyle, log on to our website latestly.com).