Indian Army Will Not Hesitate to Launch Another Surgical Strike Against Terrorists If Need Be, Says Lt Gen Devraj Anbu; Watch Video

While speaking to LatestLY reporter Sumit Sharma on the sidelines of the Indian Military Academy's Passing Out Parade (POP) in Dehradun on Saturday, Anbu stated that the security forces would not hesitate to launch another surgical strike against terrorists if the need to do so arises. 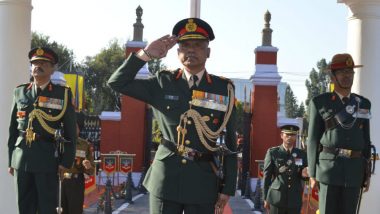 Dehradun, December 9: The Indian Army on Saturday got 347 new officers after 143rd Passing Out Passing out at the Indian Military Academy (IMA) in Dehradun. Reports inform that 428 Cadets passed out in this ceremony out of them, 347 cadets are set to join the Indian Army as officers. The Reviewing Officer of the passing out ceremony was the Vice Chief of Army Staff (VCOAS), Lieutenant General Devraj Anbu.  First in History! Indian Army to Command Foreign Army Contingent During UN Peacekeeping Mission.

During his media interaction on the sidelines of the IMA's Passing Out Parade (POP), Anbu stated that the security forces would not hesitate to launch another surgical strike against terrorists if the need to do so arises. “The surgical strike on terror launchpads across the border was a show of strength by the Indian armed forces, we won't hesitate to do it again if the enemy challenges us," Lt Gen Anbu said.

Video of Lt General Anbu's statment about Surgical Strikes during his media interaction at IMA POP:

While replying to a question of LatestLY reporter Sumit Sharma about the change in training modules of the IMA cadets keeping in view the need to conduct surgical strikes like operations in the near future, the Vice Army Chief said, "The training at the IMA has evolved over a period of time and is constantly keeping pace with the current situation, whether its a hybrid warfare, gathering information or conducting operations on the Line of Control (LoC). He also stated, "The last of the camps the IMA cadets have before the POP, the Exercise Torno, is orchestrated to ensure that the cadets are fully prepared to carry out operations on the LoC." Ranks in Indian Army: Post of Army Brigadier, Major General Could be Merged in Next 2 Years.

Watch Video: VCOAS Lt Gen Devraj Anbu talking about how the training at at the IMA has evolved taking in consideration the need to conduct Surgical Strikes like operations in the near future (IMA POP Autumn 2018):

On 29th September 2016, India had conducted the surgical strike cross the Line of Control (LoC) as a response to a terrorist attack on an Indian Army base in Uri sector of Jammu and Kashmir earlier that month. 19 Indian soldiers were martyred in the attack by Pakistan-backed terrorists. Surgical Strike Video: Fresh Visuals of September 29, 2016, Indian Army Operation in PoK Surface.

On the decision to give women combat roles in the armed forces, Lt Gen Anbu said different aspects of the proposition are being examined as conditions along the borders with Pakistan and China are different from the rest of the country.

On Saturday, families gathered as spectators to witness the last moments of their sons and daughters’ academic journey at the Indian Military Academy in Dehradun. 80 foreign cadets of seven friendly nations were also amongst the passing out cadre who will now join the armies of their respective nations.

(The above story first appeared on LatestLY on Dec 09, 2018 03:57 PM IST. For more news and updates on politics, world, sports, entertainment and lifestyle, log on to our website latestly.com).