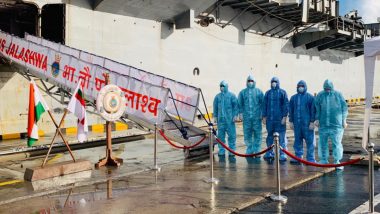 Chennai, June 1: Indian Naval ship INS Jalashwa arrived in Colombo on Monday morning to bring back approximately 700 Indian nationals who are stranded in Sri Lanka. The INS Jalashwa will bring back Indian citizens to Tuticorin in Tamil Nadu.

According to the details, the INS Jalashwa reached Colombo on Monday with a mission to bring back those Indians who got stuck after the coronavirus lockdown. This will be the first operation as part of operation 'Samudra Setu' from Sri Lanka to repatriate Indian citizens as part of Vande Bharat Mission. Operation Samudra Setu: Indian Naval Ship Jalashwa Leaves Maldives' Male Port for Kochi with 588 Indians.

Earlier, INS Jalashwa had repatriated 1286 citizens from Male in Maldives. The Indian Navy had already repatriated 1,488 Indian nationals from Malè to Kochi during the previous phase of operations. The Defence Ministry had stated on Saturday that next phase of Operation 'Samudra Setu' to repatriate Indian citizens from overseas will commence on June 1 onwards.

(The above story first appeared on LatestLY on Jun 01, 2020 08:58 AM IST. For more news and updates on politics, world, sports, entertainment and lifestyle, log on to our website latestly.com).