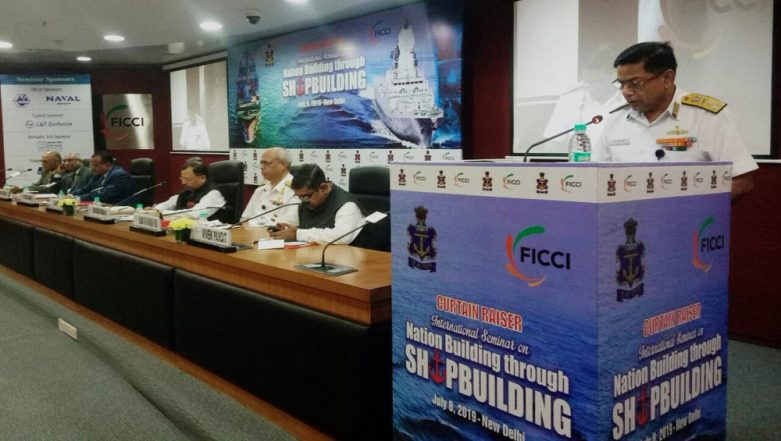 Vice Admiral AK Saxena speaking at the curtain raiser of a seminar to be organised by the Indian Navy and FICCI (Photo Credits: Twitter/FICCI)

New Delhi, July 8: The Indian Navy will get the first indigenously-built aircraft carrier INS Vikrant after two years. Vice Admiral A.K. Saxena said on Monday that the aircraft carrier is currently in the advanced stage of construction and will be delivered to the Indian Navy in 2021. The flight trials would start after the delivery of the INS Vikrant, Vice-Admiral AK Saxena added.

The aircraft carrier is expected to be commissioned into the Indian Navy in 2023. The basic trials of the aircraft carrier will be conducted in February-March next, while Starting of gas turbines will take place in the third quarter of this year. INS Vikrant, Indigenous-Built Aircraft Carrier, 'Will Be Delivered to Indian Navy by 2021', Says Admiral Sunil Lanba.

Vice Admiral Saxena was speaking at a curtain-raiser for a seminar on ‘nation building through shipbuilding’. The seminar will be jointly organised by the Indian Navy and Federation of Indian Chambers of Commerce and Industry (FICCI) in July. The Seminar will have five sessions, addressing a vast range of issues in shipbuilding, right from developing vendor base, financing, national policy framework and efficiency enablers to new considerations in ship design. China's First Indigenously Designed Aircraft Carrier Embarks On Sea Trials, Likely To Be Inducted in 2019.

However, the Comptroller and Auditor General's (CAG) report in July last year had raised doubts on the commissioning of the INS Vikrant in 2021. Work on the ship's design began in 1999, and the keel was laid in February 2009. India's first aircraft carrier was also called INS Vikrant which was decommissioned in 1997 after serving for over three decades. At Present, the Navy has only one aircraft carrier - INS Vikramaditya.