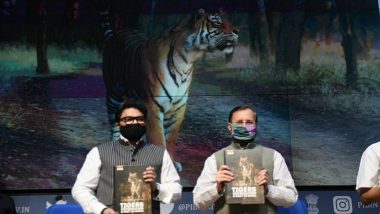 New Delhi, July 28: Union Environment Minister Prakash Javadekar on Tuesday released the report of the Tiger Census on eve of Global Tiger Day. "India is proud of its tiger assets. The country today has 70 per cent of the world's tiger population. We are ready to work with all the 13 tiger range countries in their actual management of tiger reserves," Javadekar said while speaking at a function at the National Media Centre, New Delhi."

"At the international level, we have a lot of soft powers, but one soft power is that the country has animals. India has 30,000 elephants 3,000 one-horned rhinos and more than 500 lions," he added. International Tiger Day 2020 HD Photos: Here Are 10 Interesting Facts Listed by National Geographic to Spread the Roar of the Big Wild Cat!

"We have a large amount of flora and fauna of which we are proud, our effort is to improve the environment and biodiversity. India will take the lead in taking our numbers more and has also decided to take up ambitious water and fodder augmentation programme. We have 8 per cent of the world's biodiversity, this is India's real strength, this is soft power."

MoS Babul Supriyo was also present at the event in which a poster on Small Wild Cats of India was released as well. Supriyo further informed that "about 3.5 crore photos were taken by the camera traps in the forests in the Tiger Census 2018, 76,651 of which were of tigers and 51,777 were of leopards.