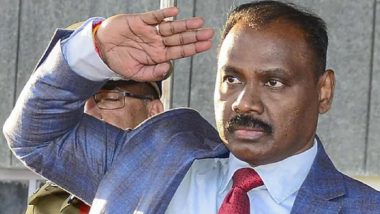 Srinagar, August 5: Jammu & Kashmir Lieutenant Governor Girish Chandra Murmu, serving as the first administrative head of the Union Territory, resigned from his post on Wednesday, confirmed the All India Radio (AIR). The senior IAS officer was subsequently announced as the next Comptroller Auditor General (CAG).

The current CAG, Rajiv Mehrishi, is set for retirement later this week. Reports citing sources claimed that the Centre had shortlisted Murmu among the final candidates. The resignation of J&K L-G confirmed that the 60-year-old would succeed the incumbent chief auditor of India. Independence Day 2020: Jammu & Kashmir Raj Bhavan Cancels 'At Home' Function In View of COVID-19 Pandemic.

Murmu, a 1985 batch officer of Gujarat cadre, had served as the principal secretary of Narendra Modi during his stint as the Chief Minister of Gujarat. He was selected by the Centre as the first L-G of J&K -- the charge he assumed immediately after the erstwhile state was converted into a UT on October 30 last year.

Jammu and Kashmir LG Girish Murmu resigns. He was appointed in October 2019 pic.twitter.com/1Kh8fG6GT8

As per reports, the resignation of Murmu was sent to President Ram Nath Kovind and has been accepted. Neither the L-G's Office nor the Rashtrapati Bhawan had issued an official statement, by the time preliminary reports had emerged.

Shortly before the news of Murmu's resignation emerged, the J&K L-G held discussions with Northern Army Command officers on the security situation in the Valley. A statement was also issued by the Raj Bhawan earlier today that the L-G has cancelled the "At Home" reception on Independence Day this year due to COVID-19 pandemic.

Murmu, in the past month, had drawn a rebuke from the Election Commission after he claimed that the polling process would be initiated in the UT in the near future. The EC had, in a statement, claimed that the conduct of polls falls under the jurisdiction of the Commission and should be considered as the key authority in announcing the updates related to upcoming elections.

The L-G had also stoked a buzz on July 26 after he told reporters that 4G internet may soon be resumed in J&K. The high-speed mobile internet facility was snapped in the region since August last year, following the abrogation of Article 370. "Pakistan will do its propaganda, whether it is 2G or 4G. It will always be there… But I don’t see an issue," Murmu was reported as saying.

(The above story first appeared on LatestLY on Aug 05, 2020 11:07 PM IST. For more news and updates on politics, world, sports, entertainment and lifestyle, log on to our website latestly.com).