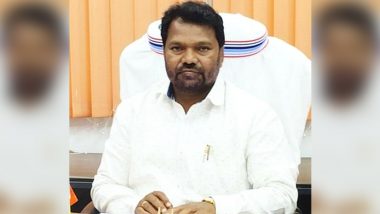 Bokaro, September 20: A controversy erupted after a private school struck off the name of the granddaughter of Jharkhand Education Minister Jargarnath Mahto due to non-payment of tuition fees. According to reports, Mahto went to the school on Saturday and paid the fees. The girl’s name was struck off the rolls as her parents failed to pay fees for online classes for more than six months.

According to a report published in The Times of India, Mahto’s granddaughter Riya studies in the fourth standard in the Delhi Public School (DPS). However, school officials denied striking off Riya’s name after seeing Mahto in school’s premises. Jharkhand HRD Minister Jagarnath Mahto Enrolls in Class 11, Was Mocked For Being 'Just a Class 10 Pass Out'.

“I went there as a guardian and not as a minister after my granddaughter told me over the phone that her name has been struck off the rolls two days ago as her fees were not paid,” reported TOI quoting the Jharkhand Minister as saying. He added that his granddaughter also told him that she had pleaded with the school officials, but they did not listen. Sonu Sood to Help Out Villager Who Sold His Cow to Buy a Smartphone For Children's Online Classes.

Notably, Reena The minister’s daughter, Reena, stays in Sector-3 of Bokaro Steel Township. According to the report, her husband is a CCL employee in Bermo. They failed to pay fees of their daughter as their salaries reduced due to COVID-19 lockdown.

(The above story first appeared on LatestLY on Sep 20, 2020 01:12 PM IST. For more news and updates on politics, world, sports, entertainment and lifestyle, log on to our website latestly.com).