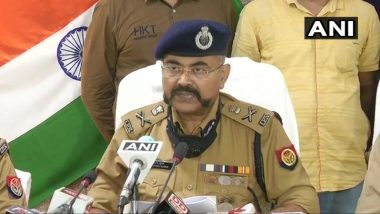 Lucknow, July 14: Two weeks after the Kanpur encounter, the Uttar Pradesh police had revealed the post-mortem report of 8 policemen killed at Bikru village on July 3. The report states that sharp weapons and guns were used to kill the 8 policemen. UP ADG Prashant Kumar said that gangster Vikas Dubey and his aides looted arms of policemen after killing them on July 3 at Bikru village in Kanpur.

Informing about the post mortem report, Uttar Pradesh Police said that gangster Vikas Dubey and his aides used sharp weapons and guns to kill the 8 policemen at Bikru village on July 3. Adding more information, the Police even said that Circle Officer Devendra Mishra had four bullet injuries and all the bullets were shot from point-blank range. Vikas Dubey’s Encounter Raises More Questions Than It Answers.

Apart from this, the UP Police chief said that gangster Vikas Dubey and his aides looted arms of policemen after killing them on July 3. The latest information was shared three days after dreaded gangster Vikas Dubey was killed in an encounter in Kanpur while trying to escape.

Here's what the police said:

After killing the 8 policemen on July 3 at Bikru village, the accused had also looted the arms of our policemen: Prashant Kumar, UP ADG Law & Order. #KanpurEncounter pic.twitter.com/OJX1zeY4Z9

Earlier on Tuesday, UP Police took custody of Vikas Dubey two aides -- Arvind Trivedi alias Guddan and Sushilkumar Tiwari alias Sonu -- who were held on Saturday by Maharashtra Anti-Terrorism Squad (ATS) and were lodged in Taloja prison in Navi Mumbai.

(The above story first appeared on LatestLY on Jul 14, 2020 10:57 AM IST. For more news and updates on politics, world, sports, entertainment and lifestyle, log on to our website latestly.com).