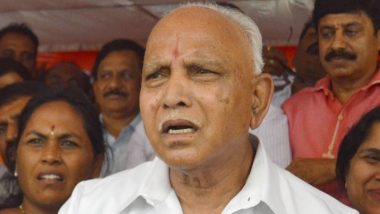 Bengaluru, July 26: A court in Karnataka's Belagavi district has issued summons to Chief Minister B S Yediyurappa in connection with a case of alleged violation of model code of conduct during the by-elections held last year. The court also ordered registration of a criminal case and directed the Bengaluru police commissioner to issue summons against the Chief Minister 'returnable by September 1, 2020.'

On November 23, during an election rally at Valmiki stadium in Gokak, Yediyurappa had while campaigning for the BJP candidate allegedly appealed to the Veerashaiva Lingayat community not to split votes. Subsequently, a case was registered. BS Yediyurappa Condemns 'Inhumane' Burial of COVID-19 Patients' Dead Bodies in Ballari.

Though the police had filed a closure report, the Principal Judicial Magistrate First Class in Gokak, Veeresh Kumar C K rejected it. "In the present case, this court is very well convinced that there are sufficient materials in the 'B' final report to proceed against the accused and subject the accused for trial for the offence punishable under section 123(3) of Representation of People's Act and 171(F) of the IPC," it noted.

The court took cognisance of the offence "against the accused by name Mr B S Yediyurappa", the judge said rejecting the 'B' Report pertaining to the closure of the case.