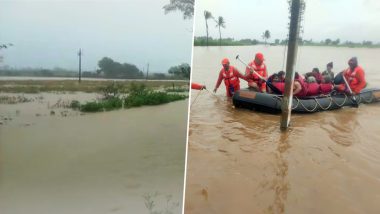 Bengaluru, October 23: Karnataka sought Rs 10,000 crore special package from the Central government for relief and rehabilitation works in dozen flood-hit districts across the state, an official said on Friday.

"Chief Minister B.S. Yediyurappa has written to Prime Minister Narendra Modi seeking Rs 10,000 crore special relief package, a day after carrying out an aerial survey of affected districts in the northern and northwest regions of the state on Wednesday," an official of the state Revenue Department told IANS here.

Besides torrential rains, flash floods were caused due to discharge of excess water from neighbouring Maharashtra into Krishna and Bheema rivers, forcing the state authorities to release more water from dams in the northern and northwest regions. Karnataka Rains: Kodagu District Faces Flood-Like Situation Due to Heavy Rainfall, River Hemavathi and River Cauvery Flow Over Danger Mark; See Pics.

According to initial estimates by the State Disaster Management Authority, kharif crops awaiting harvesting in 6.3 lakh hectares were damaged due to heavy rains and flooding as the southwest monsoon extended beyond September. "A central team will soon visit the affected districts for a spot assessment of the damage caused to crops, houses, infrastructure, including roads, bridges, highways and power lines due to heavy rains and flooding," said the official.

The state Agriculture Department has estimated Rs 21,609 crore crop loss due to excess rainfall and flash floods across the state since August. The crop loss in the first spell of heavy rains and floods from August 1 to September 15 was Rs 9,441 crore, Rs 5,668 crore in the second spell from September 20-30, Rs 6,500 crore and in the third spell from October 10-20.

"As the third spell of rains and floods claimed 10 lives and damaged about 12,700 houses, the state government has decided to give Rs 10,000 as an immediate relief to the the people affected," the official said. Karnataka Rains: Heavy Rainfall Likely Over Bengaluru Urban, Chitradurga and Other Districts, Rain Activity Over BBMP Likely for Next 2 Days.

In a related development, the state government has decided to install an early warning dissemination system in the coastal districts at a cost of Rs 27 crore for an effective disaster management mechanism."The system will be installed in the coastal districts of Uttara Kannada, Udupi and Dakshina Kannada as part of the national cyclone risk mitigation project," the official added.

(The above story first appeared on LatestLY on Oct 23, 2020 05:29 PM IST. For more news and updates on politics, world, sports, entertainment and lifestyle, log on to our website latestly.com).