The video of the incident which went viral on social media, triggered a statewide outrage. The video purportedly showed three men pushing the artistically carved pillar to the ground. 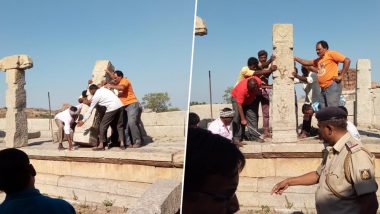 Bengaluru, February 20: Four youths, who vandalised ancient pillars at a temple in world heritage site Hampi earlier this year, paid Rs 70,000 fine each after the directions issued by a Karnataka court. According to a tweet by ANI, the four youths also helped to re-erect the fallen stone carved pillars on Tuesday. All four vandals work in Bengaluru. The video of the incident which went viral on social media, triggered a statewide outrage. The video purportedly showed three men pushing the artistically carved pillar to the ground. After vandalising the carved stone pillar, the trio were seen rejoicing in the video.

Locals in the state staged protests at several places, demanding that adequate security is provided to the monuments. On February 7, the four youth were arrested for vandalising a carved stone pillar at the UNESCO world heritage site at Hampi in Karnataka. Police informed that while three of them felled the pillars, the fourth one shot the video.

Hampi, which is known for its rich architecture, was recently listed second on the New York Times list of 52 must-go sites in the world. According to reports, the other damaged pillars were also seen lying around, but it was not immediately clear whether the men in the video had damaged it.

(The above story first appeared on LatestLY on Feb 20, 2019 11:30 AM IST. For more news and updates on politics, world, sports, entertainment and lifestyle, log on to our website latestly.com).