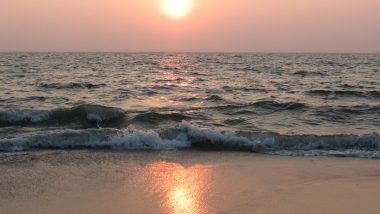 Alappuzha, September 14: In a tragic incident, a two and a half-year-old child was swept into the sea on Sunday at around 2:30 pm. At the time of the incident, which took place at Alappuzha beach in Kerala, his mother was clicking selfies with him and a two other children. The boy has been identified as Adhikrishna. The toddler’s mother arrived at her relative’s house in Alappuzha two days back with her two children and a son of her brother.

According to a report published in The Times of India, Adhikrishna’s parents, Lakshmanan and Anithamoli, are natives of Palakkad district. Binu, the relative of Adhikrishna’s parents, drove Anithamoli and the three kids to Alappuzha beach on September 13. Indian Woman From Andhra Pradesh Slips to Death While Taking Selfie With Fiance at Bald River Falls In US.

As per the report, Alappuzha police stopped them from entering the main gate of the beach due to rough conditions. Still, they went to the portion near ESI hospital. Anithamoli started clicking selfies with kids, while Binu went to park his car. Karnataka Newlywed Couple Drowns in Hemavathi River Allegedly While Taking Selfie.

“As Binu went to park the car, Anithamoli started taking selfies with the children on the beach. They got trapped in the rough waves and Adhikrishna was swept away from Anithamoli’s hands,” reported The TOI quoting a police official as saying.

Adhikrishna, who was in his mother’s arms swept away, while Binu managed to rescue Anithamoli and two children. The district child welfare committee chairperson demanded cases against Anithamoli and Binu for taking children to the beach during the rough weather.

(The above story first appeared on LatestLY on Sep 14, 2020 11:35 PM IST. For more news and updates on politics, world, sports, entertainment and lifestyle, log on to our website latestly.com).