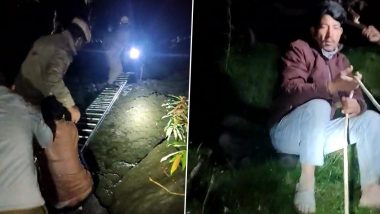 The disaster occurred following a flash flood in the Tozing rivulet in Udaipur subdivision, some 15 km from district headquarters Keylong, after a cloudburst. Himachal Pradesh Floods: 1 Dead, 10 Missing After Heavy Rainfall, Cloudburst Trigger Flash Floods in Lahaul-Spiti And Other Areas.

Superintendent of Police Manav Verma told IANS over the phone that the missing people include four BRO men and two labourers of a telecom company. They were travelling towards Pangi-Killar in a vehicle which was swept away in the flash flood.

He said one of the injured was referred to a government hospital in Kullu town, while three people were rescued.

Reports say traffic on the Manali-Leh highway was also hampered owing to massive landslides. Several vehicles, including tourists, have been stuck on the highway.

The Mandi-Kullu-Manali national highway was also disconnected from Chandigarh due to landslides at several places ahead of Mandi town. Public transport and tourist vehicles were said to be stuck there.

Owing to heavy rains, the BRO has closed the Manali-Leh highway and the Manali-Udaipur highway. The tourists and locals have been prohibited to travel beyond Manali towards Leh via Keylong till further orders.

The government has issued an advisory for tourists and locals to refrain from high mountains, wandering near rivers and other places vulnerable to landslides.

Earlier this week, nine tourists were killed when a massive landslide occurred on the Sangla-Bateseri road in Kinnaur district. They were travelling in a vehicle.

(The above story first appeared on LatestLY on Jul 28, 2021 11:48 AM IST. For more news and updates on politics, world, sports, entertainment and lifestyle, log on to our website latestly.com).