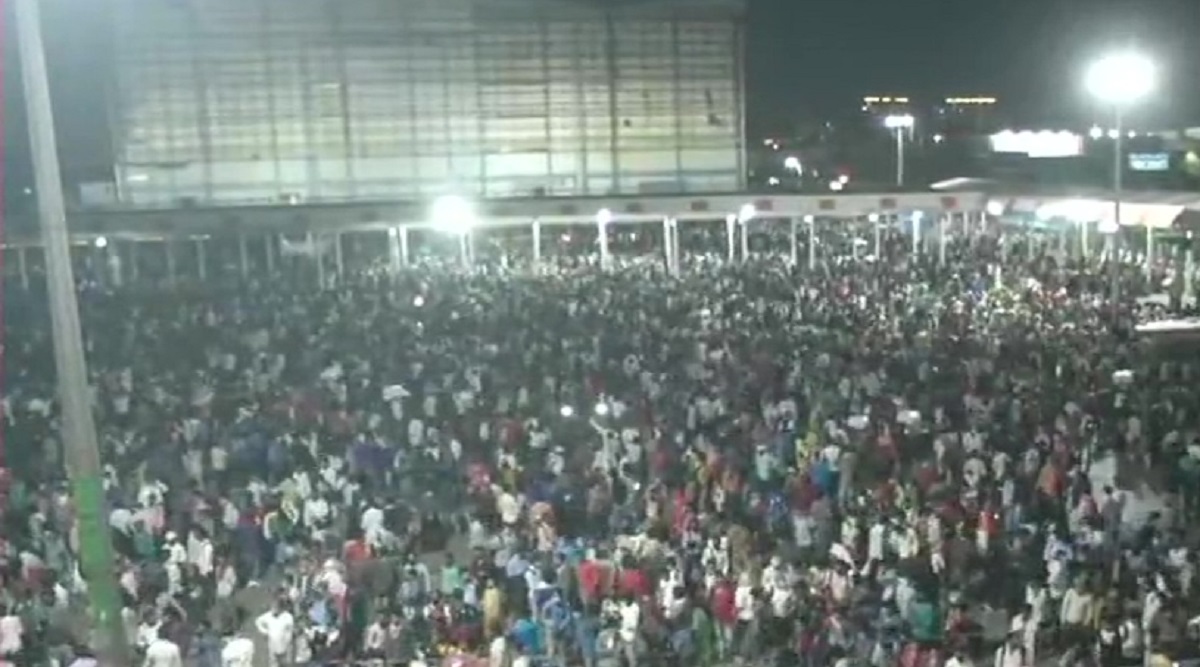 New Delhi, March 28: Large numbers of migrant labourers gathered at the Anand Vihar bus terminal in the national capital, waiting for buses which would ply to their native villages across the border. Most of the labourers are migrants from neighbouring Uttar Pradesh, and are heading back to their villages after losing their livelihoods to the 21-day lockdown imposed to contain coronavirus. Catch all the live updates of coronavirus outbreak in India and other parts of the world.

The central government, in coordination with the states where most of the migrant labourers belong to, is arranging for buses to ferry them back. The Yogi Adityanath government, earlier in the day, announced 1,000 buses which would bring back the migrants from Noida, Ghaziabad and other bordering areas.  Migrant Workers Continue Journey on Foot to Reach Homes in UP, Haryana, Rajasthan, Say 'We Are Jobless' During Coronavirus Lockdown.

Most among those who are desperately trying to return back to their hometowns and native places are daily wage earners, who were facing starvage-like situation following the sudden lockdown announced by Prime Minister Narendra Modi from Tuesday midnight.

Delhi: Migrant workers in very large numbers at Delhi's Anand Vihar bus terminal, to board buses to their respective home towns and villages. They have walked to the bus terminal on foot from different parts of the city. pic.twitter.com/IeToP3hX7H

The migrant labourers walked from different parts of the city, traversing several miles, to reach the Anand Vihar bus terminal. Some of them, in the past few days, also embarked upon a foot-journey back to their native places. Speaking to reporters, the migrants said they were left with no accomodation, no food and no shelter -- which compelled them to leave for their villages.

The Ministry of Home Affairs (MHA), taking cognisance of their plight, issued a statement earlier today asking the governments of the state where they are stranded to arrange for accomodation.

"MHA directs States/UTs to include provisions for temporary accommodation, food, clothing, medical care etc. for homeless people, including migrant labourers, stranded due to the lockdown and provide them shelter in relief camps under SDRF fund allocations," said a statement issued by the Home Ministry on Saturday.