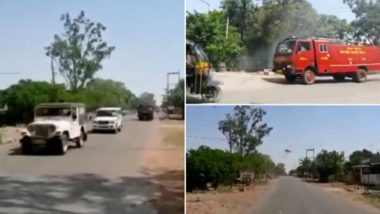 Madhya Pradesh, May 28: Swarms of locusts are creating havoc in several states across India. Various ways are being used to fight against the insects and the latest being, the using police sirens. According to a video shared by ANI, the district administration in Panna was using police sirens to scare away the swarms of locusts. According to reports, tiddi dal is usually seen from June to November, and this is for the first time that they have entered the country earlier. Locust Invasion in India: Rajasthan And Madhya Pradesh Use Drones to Spray Chemicals And Fight Tiddi Dal Attack.

Also, the desert locusts are seen either solitary or in small groups, which means that such swarming which is taking place this time is highly unusual. Farmers across Rajasthan, Madhya Pradesh, Gujarat have been hassled as these insects have damaged several crops so far. Drones were deployed to spray chemicals on the swarms of locusts and also reach tall trees and all the other inaccessible areas where these insects settle.

Here's the video on how Panna administration is using police sirens to scare locusts:

#WATCH Madhya Pradesh: Swarms of locusts being scared away by the district administration in Panna, using police sirens yesterday. pic.twitter.com/rEcXXsMXq1

The Ministry in a statement on Wednesday said about 21 districts in Rajasthan, 18 districts in Madhya Pradesh, 2 districts in Gujarat and 1 district in Punjab have undertaken locust control measures till now. Farmers were seen banging thalis to create noise to scare the insects in several states.

On Wednesday, UP Chief Minister Yogi Adityanath directed 14 district administrations to remain alert to swarms of locusts and asked people to bang thalis and drums to ward off swarm of locusts.

(The above story first appeared on LatestLY on May 28, 2020 10:35 AM IST. For more news and updates on politics, world, sports, entertainment and lifestyle, log on to our website latestly.com).