The Madras High Court will get two new judges after the Union government notified their appointments. 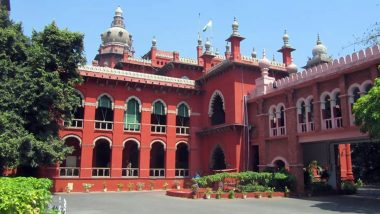 Chennai, March 25: The Madras High Court will get two new judges after the Union government notified their appointments.

They are N. Mala, currently the government pleader of Puducherry with 32 years of bar experience, and S. Sounther, who has 28 years of experience as a practicing advocate. The appointments will take the strength of judges in the high court to 61 as against the sanctioned strength of 75.

Mala enrolled as an advocate in August 1989 and specialised in writ and civil appellate side. She has appeared and conducted cases before the Supreme Court, Madras High Court, and various tribunals across the state. Supreme Court Agrees To Examine Plea Against Redevelopment of Sabarmati Ashram Project.

Appointed as the government pleader for Puducherry in 2020, she became the first woman to hold that office. Sounthar enrolled as an advocate in 1993 and specialised in writ, civil appellate, criminal, labour, and service matters.

Meanwhile, Justice Pushpa Sathyanarayana, who retired from the high court, has been appointed a full-time member of the National Green Tribunal for a period of four years.

(The above story first appeared on LatestLY on Mar 25, 2022 05:11 PM IST. For more news and updates on politics, world, sports, entertainment and lifestyle, log on to our website latestly.com).