NMIMSAA Director, Air Commodore Hitesh Patel (retd) told IANS that the aircraft was an Italian-made TECNAM P-2008Jc, which had been given an airworthiness and training certificates barely six months ago. 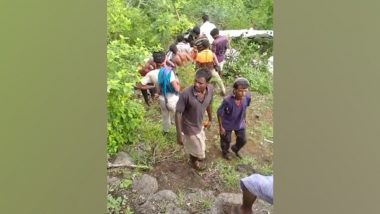 Jalgaon, July 16: The pilot was killed and the woman trainee was injured when a brand-new training aircraft belonging to a private aviation academy crashed in a field near Chopda village of Maharashtra's Jalgaon district on Friday, officials said.

The incident occurred around 4 p.m., when the light training aircraft suddenly came crashing down, killing the pilot instantly and injuring the flying trainee, while horrified villagers informed the local police and district authorities, who rushed there led by local Tehsildar Anil Gavit.

The victims have been identified as pilot-instructor Noorul Ameen, 28, hailing from Bengaluru, and trainee-pilot Anshika Gurjar, 22, who is a residential student from Khatgaon in Madhya Pradesh, and has reportedly suffered multiple fractures in the crash, but is stated to be "out of danger". Maharashtra Chopper Crash: One Dead, Another Injured in Helicopter Crash in Jalgaon.

The two-seater aircraft of Italian make - VT-BRP - belonged to the NMIMS Academy of Aviation (NMIMSAA), at Shirpur in Dhule, affiliated with the reputed Shri Vile Parle Kelavani Mandal (SVPKM)'s group of educational institutions in Mumbai

"It's a very unfortunate incident. The aircraft was a very new one. The pilot was very senior with over 500 hours of flying experience who joined us in January. Something must have tragically gone wrong somewhere," a shocked SVPKM President Amrish Patel told IANS.

Patel, who is a senior BJP legislator, said that the aviation academy is shifting the woman trainee pilot by an ambulance to Mumbai's Nanavati Hospital for treatment.

NMIMSAA Director, Air Commodore Hitesh Patel (retd) told IANS that the aircraft was an Italian-made TECNAM P-2008Jc, which had been given an airworthiness and training certificates barely six months ago.

The small single-engine plane - now reduced to a heap of crumpled metal pieces - had joined the academy's existing fleet of 3 small trainer aircraft for training the students, he said.

Union Minister for Civil Aviation Jyotiraditya Scindia condoled the incident and said a team of investigators is being rushed to the crash-site for a probe.

"Shocked to hear about the tragic crash of a training aircraft that belonged to the NMIMS Academy of Aviation, Maharashtra. Unfortunately, we lost the flight instructor & the trainee is severely injured," said Scindia in a tweet this evening.

He offered his heartfelt condolences to the bereaved Amin family and prayed for the quick recovery of the trainee.

(The above story first appeared on LatestLY on Jul 16, 2021 08:58 PM IST. For more news and updates on politics, world, sports, entertainment and lifestyle, log on to our website latestly.com).