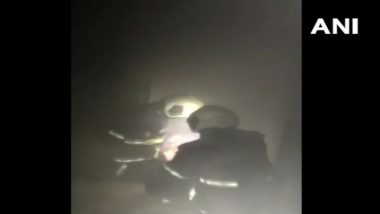 Mumbai, May 28: A massive fire broke out at Hotel Fortune near Metro Cinema in Dhobi Talao area of Mumbai. As soon as the incident was reported, five fire engines and four jumbo water tankers were rushed to the spot. The fight fighting operations are currently on to douse the flames. Mumbai Fire: Massive Blaze Reported from Open Ground Near Eastern Express Highway Along Nahur-Bhandup; Watch Video.

The cause of the blaze is yet to be ascertained. Till now, there have been no reports of any casualties. The hotel was ground plus four-storey building. It was housing 25 resident doctors. All have been evacuated. Mumbai Fire: Massive Blaze Engulfs Shanties Behind City Centre Mall in Mumbai Central; Watch Video.

About 25 resident doctors who were at the hotel have been evacuated safely. Firefighting & rescue operations still underway: Mumbai Fire Brigade https://t.co/wlMpPd9zDd pic.twitter.com/SrTmH5SN1g

Last week, a similar fire broke at an open maidan near the Lok Priya Park in Bhandup (East) adjacent to the Eastern Express Highway. In another incident from last week, a blaze was reported from a residential building in Mumbai's Mazgaon area. No injuries were reported in both incidents.

(The above story first appeared on LatestLY on May 28, 2020 12:11 AM IST. For more news and updates on politics, world, sports, entertainment and lifestyle, log on to our website latestly.com).