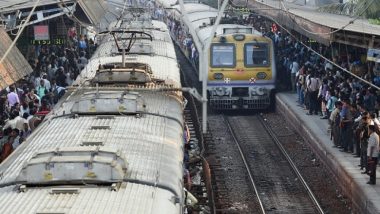 New Delhi, March 22: Local trains in Mumbai, often referred to as city's lifeline, will remain shut for public from March 22 midnight to March 31 in the wake of the measures taken during the COVID-19 outbreak in India. The Indian Railways on Sunday announced that all passenger train services including Premium trains, Mail or Express trains, Passenger trains, Suburban Trains, Kolkata Metro Rail, Konkan Railway etc shall be cancelled till March 31. The local trains, which keeps India’s financial capital and its adjacent urban regions going, will serve only those providing essential services and will remain suspended for general public till March 31.

However, bare minimum level of services of suburban trains and Kolkata Metro Rail shall continue till midnight of March 22. The Railways said that trains which had already commenced their journey prior to 4 am today will run up to their destinations. In an official release, the Railways said that adequate arrangements shall be made for the passengers, who have commenced their journey during the travel and at their destinations.

Strengthening precautions against COVID-19, Railways has decided that no passenger train will run up to 31st March.

Let us work together as #IndiaFightsCorona pic.twitter.com/374b0V5sD3

To ensure the essential supplies in various parts of the country, movement of goods trains will continue, the Railways said. To make it more convenient for passengers, full refund for all cancelled trains may be taken till 21.06.2020. Arrangements have been made to facilitate hassle-free refund to passengers affected by train cancellations. Earlier this week, the dabbawalas, an army of super-efficient lunch-box delivery persons announced that they will also be off the streets till March 31.

With 74 positive cases, Maharashtra has the highest number of COVID-19 patients in the country. The state reported 10 new cases on Sunday among several foreign-returned persons, state Health officials said. In India, the total number of positive cases of coronavirus climbed to 341, with a total of six deaths in the country after two deaths in Maharashtra and Bihar on March 22.

(The above story first appeared on LatestLY on Mar 22, 2020 02:42 PM IST. For more news and updates on politics, world, sports, entertainment and lifestyle, log on to our website latestly.com).