'Muslim Women Rights Day' was observed on Sunday by different organisations across the country to mark the second anniversary of the enactment of law against the 'triple talaq'. 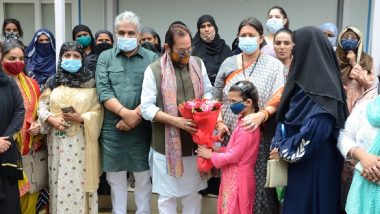 New Delhi, August 1: 'Muslim Women Rights Day' was observed on Sunday by different organisations across the country to mark the second anniversary of the enactment of law against the 'triple talaq'. Union Minority Affairs Minister Mukhtar Abbas Naqvi, Women and Child Development Minister Smriti Irani and Labour Minister Bhupender Yadav attended the programme to mark the occasion where the Muslim women wholeheartedly thanked Prime Minister Narendra Modi for bringing the law which made the practice a criminal offence.

On August 1, 2019, that the Modi government passed the Triple Talaq bill in Parliament abolishing the practice of triple talaq in the Muslim community. Since then, the day is celebrated as Muslim Women Rights Day. The Union Ministers also interacted with several Muslim women who were triple talaq victims. Muslim Women Rights Day To Be Observed Across the Country on August 1, 2021 To Celebrate Enactment of Triple Talaq, Says Minority Affairs Minister Mukhtar Abbas Naqvi.

The women told the ministers that the Modi government has strengthened 'self-reliance, self-respect, self-confidence' of Muslim women and protected their constitutional rights by bringing a law against the cruel social evil of triple talaq.

Addressing the participants of the programme, Yadav said the Modi government has been working to ensure dignity and empowerment of women of every section of the society.

"The Modi government has ensured dignity of Muslim women by bring law against social evil of triple talaq. The government's policy of development without discrimination has created an atmosphere of trust across the country," Yadav said.

"Our government believes in decision delivery and that's why we have seen such historic steps. Not just abolishing triple talaq, we also saw how 'mehram' was done away with and women can go for Haj," Naqvi said.

Naqvi pointed out that there is a significant decline in triple talaq cases after the law came into effect and said that Muslim women across the country have overwhelmingly welcomed this law.

Addressing the gathering on the occasion, Irani said: "August 1 is a day to salute struggle of Muslim women against triple talaq. Ministry of Minority Affairs; Ministry of Women and Child Development, and Labour Ministry will work united to encourage entrepreneurship among Muslim women."

(The above story first appeared on LatestLY on Aug 01, 2021 05:30 PM IST. For more news and updates on politics, world, sports, entertainment and lifestyle, log on to our website latestly.com).