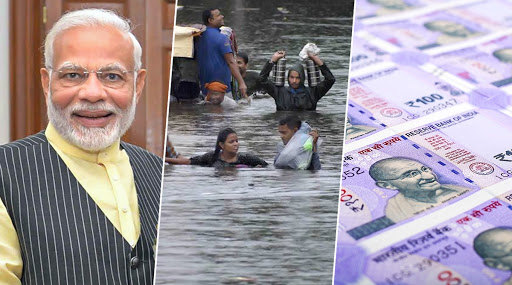 New Delhi, October 4: With floods creating havoc in Bihar and over 73 lost lives in Bihar floods, the Narendra Modi government on Friday approved the advance release of the second instalment of Centre's share of SDRF amounting to Rs 213.75 crore. Apart from this, the Centre also approved the advance release of Rs 400 crores for Bihar and Rs 1200 crores for Karnataka from National Disaster Response Fund (NDRF) 'on account basis'.

Announcing the relief package for the two flood-affected states, the Centre stated that the flood-affected people. According to reports, torrential rain that took place between September 27 and September 30 in Bihar, due to which flood-like situation in 15 districts of the state took place. Bihar Floods: 73 Dead, Patna Continues to Reel Under Impact of Flood; NDRF Evacuates Over 9,000 People From Affected Areas.

Among the worst affected in Bihar include Patna, Vaishali, Khagaria and nearby regions of Gangetic plains. Till now, State Disaster Relief Force have rescued over 10,000 people, while the relief operations are underway in several parts of the state.

Till Wednesday, the National Disaster Response Force (NDRF) teams evacuated more than 9,000 flood-affected people in Bihar since September 28. The teams are also helping district authorities in providing essential supplies like food, medicines, drinking water to the people through NDRF boats while two medical teams are providing medical assistance to needy.