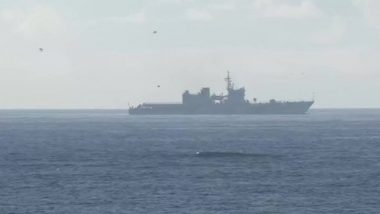 Tamil Nadu, October 11: The second informal meeting between PM Narendra Modi and Chinese President Xi Jinping will begin in Mamallapuram on Friday. Indian Navy and Indian Coast Guard have deployed warships, at some distance from the shore in Mamallapuram, to provide security from any seaborne threat, according to an ANI tweet.

Reportedly, Xi will land at the Chennai International Airport at about 4 pm on Friday. From there he will depart to Mahabalipuram by his Hongqi luxury car to meet PM Modi. Mahabalipuram has been chosen for the summit as the historical city has ancient links with China during the Pallava dynasty.

It was the major port city in the seventh century and served as a gateway between South India and China for import and transport of goods. Several epigraphical evidence, including coins and inscriptions of Chinese symbols, points towards the old-age link. Narendra Modi-Xi Jinping Meet: Everything You Need to Know About Indian PM and Chinese President's Second Informal Meet at Mahabalipuram.

Tamil Nadu: The 2nd informal meeting between PM Narendra Modi and Chinese President Xi Jinping to begin in Mamallapuram today. Indian Navy and Indian Coast Guard have deployed warships, at some distance from the shore in Mamallapuram, to provide security from any seaborne threat. pic.twitter.com/wmO2ImJWcC

Chennai Informal Summit will provide an opportunity for the two leaders to continue their discussions on overarching issues of bilateral, regional and global importance. This is the second informal meeting of the two world leader. They had their first inaugural informal summit in China's Wuhan on April 27 and 28 last year.

The town is decorated to welcome Chinese President:

Tamil Nadu: Security heightened in Mamallapuram and decorations put up. The town is all set to welcome Chinese President, Xi Jinping as he arrives today to hold the second informal meeting with Prime Minister Narendra Modi. pic.twitter.com/d19GjO0a13

Security has been tightened in Mamallapuram and beautiful decorations put up to welcome the Chinese President. As a part of the welcoming ceremony, several students will greet President Xi by waving Indian and Chinese flags. An eight-feet stone sculpture of Goddess Meenakshi has also been temporarily installed at the Chennai airport.

(The above story first appeared on LatestLY on Oct 11, 2019 08:29 AM IST. For more news and updates on politics, world, sports, entertainment and lifestyle, log on to our website latestly.com).