Navi Mumbai: Traffic Diversion Announced for June 24 Due to Protest Over Naming of Airport, Check Details of Diversions, Blockades on Mumbai-Navi Mumbai-Pune Stretch

Anticipating a law and order situation due to a protest, the Navi Mumbai Traffic Police have announced a diversion in vehicular movement on Thursday, June 24. 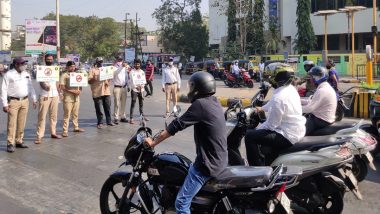 Though the Navi Mumbai Police have not granted permission, protesters aim to march to CIDCO Bhawan tomorrow in order to amplify their demand. The organisers have claimed that nearly one lakh protesters are likely to join the march on June 24. Anticipating a huge crowd, the Navi Mumbai Traffic Police announced diversions for vehicles coming from Mumbai and Pune. Navi Mumbai Ex-Cop Bhagwan Patil Arrested For Killing His One Son, Injuring the Other.

All heavy motor vehicles and light motor vehicles travelling from Mumbai towards Pune will be diverted from Airoli toll plaza via Mahape-Shilphata road to reach Kalamboli. Similarly, vehicles coming from Pune will be diverted from Purusharth petrol pump at Kalamboli on Sion-Panvel road to Airoli via Taloja MIDC and Roadpali to head towards Mumbai. No vehicle will be allowed to ply along Uran phata road till CBD and beyond till Kharghar.

(The above story first appeared on LatestLY on Jun 23, 2021 02:41 PM IST. For more news and updates on politics, world, sports, entertainment and lifestyle, log on to our website latestly.com).