Amid widespread protests against the National Register of Citizens, the Modi government on Tuesday told Parliament that no decision has been taken to carry out nationwide NRC. 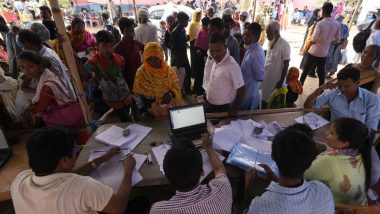 New Delhi, February 4: Amid widespread protests against the National Register of Citizens, the Modi government on Tuesday told Parliament that no decision has been taken to carry out nationwide NRC. "Till now, the government has not taken any decision to prepare National Register of Indian Citizens (NRIC) at the national level," Union Minister of State for Home Affairs, Nityanand Rai said in a written reply to a question in Lok Sabha. Why Citizenship Amendment Act+NRC Raise Fear And Concerns: A Multi-Dimensional Take.

Prime Minister Narendra Modi, while an election rally in Delhi on December 22 last year, had also that there had been no discussion in the government on the NRC. “Lies are being spread. From the time my government came in 2014 until today… there has been no discussion on NRC. No talk at all," PM Modi had said. The Prime Minister's clarification came after Union Home Minister Amit Shah’s assertions on more than one occasion that a countrywide NRC exercise would be carried out. CAA Protests: 'Those Born Before 1987 or Whose Parents Are Born Before 1987 Are Indians', Says Government.

And as early as in November 2014, then Minister of State for Home Kiren Rijiju had told Rajya Sabha that the National Register of Population, which has been sanctioned by the Modi government, is updated for the NRC. "The NPR is the first step towards the creation of National Register of Indian Citizens (NRIC) by verifying the citizenship status of every usual residents," Rijiju had said.

The CAA gives Indian citizenship to immigrants fleeing religious persecution in Pakistan, Bangladesh and Afghanistan, but not if they are Muslims. Critics say that the law is linked with NRC which was carried out in Assam to identify infiltrators. According to them, while non-Muslims, left out of NRC, could have an option to obtain Indian citizenship through CAA, excluded Muslims would be treated as "doubtful" or deported or sent to detention centres.

(The above story first appeared on LatestLY on Feb 04, 2020 11:55 AM IST. For more news and updates on politics, world, sports, entertainment and lifestyle, log on to our website latestly.com).