In a bizarre incident, a doctor beat up a young patient at Dharamgarh Sub-Divisional Hospital in Odisha's Kalahandi district, police said on Tuesday. 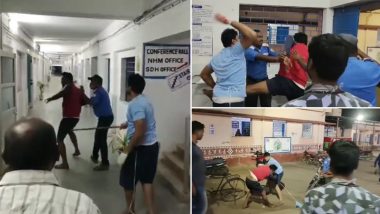 Bhubaneswar, March 15: In a bizarre incident, a doctor beat up a young patient at Dharamgarh Sub-Divisional Hospital in Odisha's Kalahandi district, police said on Tuesday.

A video of this incident went viral on social media.

According to locals, a patient of Dharamgarh locality had gone to the hospital on Sunday at around 10.30 p.m. with the complaint of a severe stomach ache. As he could not find the doctor there, he raised his voice. Pune: 'Drunk' Woman Blocks Traffic, Creates Ruckus on Tilak Road in Swargate Area; Video Goes Viral.

Here Is The Video:

Later, an argument broke out between the patient and the doctor identified as Sailesh Kumar Dora at the hospital. Following which, Dora thrashed the patient.

"When I went to the hospital with severe stomach pain, no doctor was there to attend to me. When I asked the security guard, he said the doctor has gone to the washroom. After some time, someone from the medical staff injected two injections and I was on a stretcher. At that time, the doctor suddenly came to me and started beating me like anything," alleged the victim, Mukesh Naik.

The patient and local people also staged a road blockade on Monday demanding the arrest of the doctor. Two different complaints have been filed by the doctor and patient in the local police station.

"We have registered a case and detained the physician on this incident. Further investigation is on," said Dhiraj Kumar Chopdar, sub-divisional police officer (SDPO), Dharamgarh.

(The above story first appeared on LatestLY on Mar 15, 2022 01:50 PM IST. For more news and updates on politics, world, sports, entertainment and lifestyle, log on to our website latestly.com).