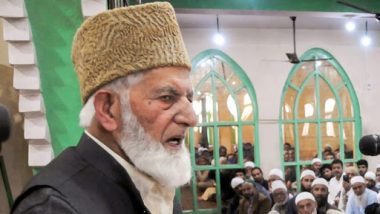 Islamabad/Srinagar, July 28: The Upper House of Pakistan's parliament on Monday passed a resolution asking the Imran Khan government to confer former chief of All Parties Hurriyat Conference -- Syed Ali Shah Geelani -- with Nishan-e-Pakistan. It is the highest civilian honour of Pakistan. Apart from this, the Senate -- Pakistan's Upper House -- had also asked the government to name a proposed university in Islamabad after Geelani.

According to a report, published in the Indian Express, Pakistan's Senate had proposed the resolution to award ex-APHC with Nishan-e-Pakistan, who has been under house arrest in Kashmir for several years. The Senate adopted the resolution unanimously and sought that Geelani's life story be included in the school curriculum at the national and provincial levels. Among other things, the resolution also resolved to hold a sitting of the Senate at Muzaffarabad. Syed Ali Shah Geelani, Senior Hurriyat leader Resigns From All Party Hurriyat Conference.

The following development comes days after Geelani stepped down for the post of 'chairman for life' of the APHC. Veteran separatist leader SA Shah Geelani in June had announced his dissociation from the faction of the Hurriyat Conference that he floated in 2003, by enforcing a vertical split in the amalgam. In a four-line letter and an audio message to the media, a spokesperson for the 90-year-old leader said, "Geelani has announced complete dissociation from Hurriyat Conference forum."

Stating the reason for his resignation, Geelani had written a detailed letter to all constituent parts of the amalgam. In the letter, he had said the activities of Hurriyat Conference members currently in Pakistan-occupied Kashmir were being investigated by the amalgam for various allegations.

Apart from launching a blistering attack against Hurriyat leaders, Geelani had alleged Hurriyat representatives of corruption and cosying up to power structures in Pakistan. After his resignation, the hardline Kashmiri separatist leader had nominated Abdullah Geelani as the head of the APHC.

(The above story first appeared on LatestLY on Jul 28, 2020 02:42 PM IST. For more news and updates on politics, world, sports, entertainment and lifestyle, log on to our website latestly.com).