According to Mohapatra, if such people are caught, they can face legal action and may have to go to jail under section 428. At the same time, he said that any RWA or society cannot make its own rules. He said the guidelines of the Supreme Court are that you can keep the dog, most loyal companion of man, with you. 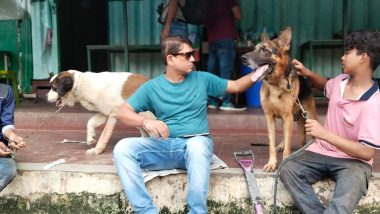 Noida, September 18: As the videos of dogs from dangerous breeds attacking people are going viral, many owners are now trying to get rid of these dogs kept as pets.

Some people are abandoning these dogs in the dead of night. Among them, the maximum number of dogs are of German Shepherd and Pitbull breeds. However, these people do not know that action can be taken against them under the Cruelty to Animals Act.

In the past, many such videos have gone viral in other areas besides Noida-Greater Noida and Ghaziabad, in which such dogs have made the elderly, delivery boys and others including children their victims, be it in a lift, a park or a road.

To stop such incidents, the government and administration are trying to ensure that the concerned department should have complete information about the homes where these dangerous dogs are kept. Dog Attacks: Registration of Dogs Starts in Ghaziabad; 50% of Registered Dogs Considered To Be of Dangerous Species.

The rules and regulations, which were made earlier, are now being strictly implemented to gather complete information about the vaccination of dogs and their registration.

Nine dogs in Noida, considered to be from dangerous breeds, were quietly abandoned by their owners outside an NGO in the last 15 days. In the last one month, NGO Noida's 'House of Stray Animals' has received more than 200 calls from different corners of the country, where people wanted to leave their dangerous breed dogs at the NGO.

The NGO says that it cannot keep so many dogs together because it does not have enough space. That's why, the NGO through its counselling teams is explaining to the people and saying that if the dogs are properly taken care of, then such incidents will not happen. Sanjay Mohapatra, who started 'House of Stray Animals', says that in the last 15 days, nine dogs were tied up outside the NGO silently during the night.

According to Mohapatra, if such people are caught, they can face legal action and may have to go to jail under section 428. At the same time, he said that any RWA or society cannot make its own rules. He said the guidelines of the Supreme Court are that you can keep the dog, most loyal companion of man, with you.

Registration of Dogs Starts in Ghaziabad

Registration of dogs in Ghaziabad Municipal Corporation has started and people are getting their dogs registered sitting online. It has been made mandatory to upload the vaccination card of dogs. So far, about 3,000 registrations have been done, of which more than 50 per cent are dogs which are considered to be from dangerous breeds.

As per the trend, people prefer to keep canines of breeds like Rottweiler, Siberian Husky, German Shepherd. There are more than 20,000 dogs in Ghaziabad while a total of 70 breeds of dogs are being reared in the city. Registered dogs include exotic and dangerous breeds like Pitbull, Rottweiler, Boxer, German Shepherd, Great Dane, Bull Mastiff.

'Strict Rules Should Be Made'

While speaking to IANS, Yogendra Sharma, president of all the RWAs' governing body formed in Gautam Budh Nagar, Federation of Noida Residents Welfare Association, said that the government and the district administration should make the laws regarding keeping dogs more strict so that people follow them properly. At the same time, units that sterilise stray dogs roaming in the streets and societies, should be increased. Scared of Dog Attack? This Dog Repellent Device Will Help You Keep Dogs at Bay; Here’s How It Works.

According to him, at present only two units are doing this work in Noida. Due to this, the work of sterilisation of dogs is not being done properly, so apart from domestic pet dogs, more cases of stray dog bites are seen on the road.

(The above story first appeared on LatestLY on Sep 18, 2022 11:44 AM IST. For more news and updates on politics, world, sports, entertainment and lifestyle, log on to our website latestly.com).