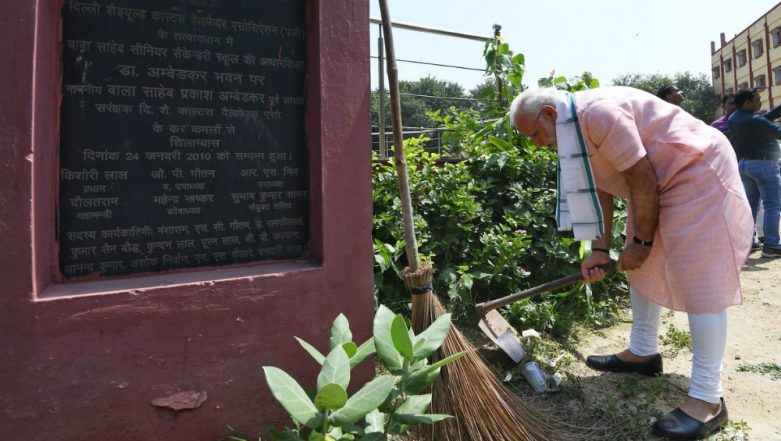 New Delhi, Sep 15: Prime Minister Narendra Modi on Saturday launched "Swachhata Hi Seva" (cleanliness is service) movement by interacting with common people and personalities from diverse fields through video conferencing at 17 locations and said the country has achieved more in sanitation coverage in the last four years than that in the last 60-65 years.

Modi performed "shramdaan" (manual labour) at Babasaheb Ambedkar Higher Secondary School in Delhi after his video interaction. An official release said the Prime Minister drove to the school and back in normal traffic without customary protocol and no special traffic arrangements were made for his visit.

In his remarks during video conferencing, Modi said cleanliness coverage was 40 per cent in 2014 and it now has grown to over 90 per cent on account of people's efforts.

"Who could have thought that we will progress so much in cleanliness coverage in the last four years that could not be achieved in the last 60-65 years. Could anybody have thought that nine crore toilets will be built in the country in four years? Had anybody imagined that about 4.5 lakh villages, over 450 districts and 20 states and Union Territories will become open-defecation-free (ODF) in four years?" he said.

Modi said the day marks a new resolve, new enthusiasm and a new dream. "Today 1.25 crore citizens are going to repeat the pledge of cleanliness is service. From today till October 2, we all will contribute with new energy and enthusiasm to make the country clean," he said.

"We can say with pride that every section, every community, every caste, people of every age are taking this big campaign forward. Whether it is village, city, street or a corner, no part of the country is untouched by the campaign," he added.

Modi said that toilets can be provided and efforts made for proper waste management, but cleanliness is a habit which has to be included in the daily experience. "This a yagna for change in behaviour in which all of you are taking part."

He said the name of "swachhagrahis" (cleanliness workers) will be written in golden letters when the history of this movement is written.

"The way the freedom fighters and martyrs are viewed with respect, your contribution will also be remembered with the same respect as a true inheritor of revered Bapu's legacy, because you have become a soldier in efforts to rebuild the country, save lives of the poor and restoring the country's image in the world.

"There is immense power in 125 crore citizens, our enthusiasm is on the rise and our pledge is to achieve success," he said.

The Prime Minister interacted with school children from Dibrugarh in Assam, members of milk and agriculture cooperatives assembled in Mehsana, personnel of ITBP from the high-altitude Pangong Lake in Ladakh, women swachhagrahis from Dantewada in Chhattisgarh and Salem in Tamil Nadu, citizens from Rajgarh in Madhya Pradesh and Fatehpur in Uttar Pradesh, volunteers engaged in cleaning the Ganga from Bijnor in Uttar Pradesh and railway employees from Rewari in Haryana.

Yogi Adityanath, who was in Fatehpur in Uttar Pradesh, said during the video interaction that the state would become ODF by October 2, 2019, and his government had constructed over 1.36 crore toilets in the last 17 months.

He said cleanliness was a distant dream for 99,000 villages of the state four years ago and only about 25 lakh toilets were built in the state by the previous Samajwadi Party government in about two-and-a-half years since the launch of the "Clean India" campaign on October 2, 2014.

Amitabh Bachchan said he found TV to be an "effective way to spread the message of cleanliness" and people should focus on ensuring their immediate surroundings are clean. Ratan Tata said sanitation and cleanliness are important factors in ensuring good health of people.

"To be a strong India, the foundation has to be strong and that foundation is the health of our people. We can reduce and eliminate several diseases if we support the Swachh Bharat movement," he said.