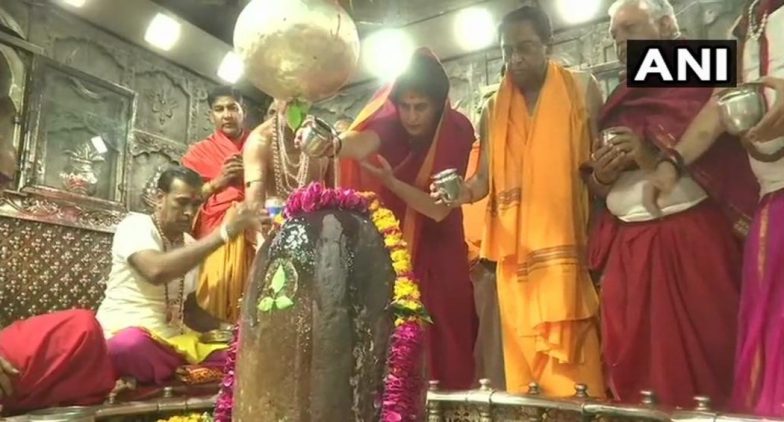 Ujjain, May 13: All India Congress Committee general secretary Priyanka Gandhi Vadra on Monday offered prayers at Mahakaleshwar temple in Ujjain. She was accompanied by Madhya Pradesh Cheif Minister Kamal Nath. Priyanka Gandhi is in the state to campaign for Indian National Congress candidates before the last phase of 2019 Lok Sabha Elections which is scheduled for May 19. Priyanka Gandhi Helps Terminally Ill Girl Rush to AIIMS, Arranges Private Jet.

Notably, this is the first time that Priyanka will be campaigning for the grand old party in Madhya Pradesh. According to reports, after offering prayers, she will be addressing a public meeting in Ratlam. Later, in the evening, she will hold a roadshow in Indore for party candidate Panka Sanghvi. Ujjain, Dewas, Ratlam, Dhar, Mandsaur, Khargone, Indore, and Khandwa will be voting on May 19. Priyanka Gandhi Vadra Says PM Narendra Modi Will Be Defeated Because of Ego ‘Like Duryodhana’, BJP Replies 'May 23 will Decide'.

Indore is one of the toughest seats for the Congress which last won the seat there in 1985. Since last 30 years, Indore had elected Bharatiya Janata Party MP and Lok Sabha Speaker Sumitra Mahajan. However, Mahajan, has stepped down this time and BJP has fielded Shankar Lalwani.