Punjab Assembly Elections 2022: From Bhagwant Mann to Charanjit Channi, A Look at Probable CM Candidates in The State 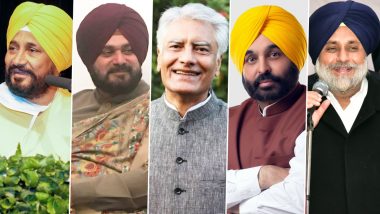 With weeks left for the much-awaited assembly election in Punjab, the politics in the state, has become as uncertain as a T20 Cricket match.

Apart from the Akalis and AAP all the parties seem to be struggling with their choices. These seem to be the probable chief ministerial candidates for Punjab.  Assembly Elections 2022: What is cVIGIL App And How to Use It

Charanjit Singh Channi, who is the current Chief Minister of Punjab, is a strong Dalit leader belonging to the Scheduled Caste. He is also Punjab's first Dalit Chief Minister. Post the resignation of Captain Amarinder Singh, his appointment by the Congress high command came as a surprise to many because he wasn't much influential outside Punjab. Since he was chosen over various other leaders of the party, he holds a firm ground to be the next CM face for Congress in Punjab.

Former PCC President Sunil Jakhar’s name as the next Punjab CM has raised significant interest in the political circles of Punjab. Being a farmer as well as a person from the Hindu community may work in his favour. Sunil Jakhar is the son of former Lok Sabha Speaker Balram Jakhar and is a well-known landlord from Abohar. Three-time MLA from Abohar constituency and MP from Gurdaspur Lok Sabha constituency after winning the 2017 By-election, He was also the Leader of Opposition in Punjab Assembly during the previous coalition government of SAD and BJP. The soft-spoken Jakhar may get elevated to the top if Congress manages to win the upcoming election.

Navjot Singh Sidhu, the retired international cricketer has changed the dynamics of punjab politics since he entered the congress party. Sidhu began his political career with the BJP but later shifted to the Congress.

Much recently, he had a feud with the then Chief Minister of Punjab, Captain Amarinder Singh, post which, he submitted his resignation as the Punjab Pradesh Congress Committee Chief. His resignation was rejected by the High Command of the party and the matter settled down after the Chief Minister resigned from his post.

Aam Aadmi Party (AAP) is the main opposition party in the current Punjab Government. Bhagwant Mann, the party's MP from Sangrur, is the only popular face for the party in Punjab and has been very active on the ground. Rightly, the party made him their chief ministerial candidate for the upcoming polls.Punjab Assembly Elections 2022: Who is Bhagwant Mann, AAP’s CM Face For The Upcoming Polls

A former comedian, Bhagwant Mann appeared in the Great Indian laughter challenge's season 1, where he was judged by Navjot Singh Sidhu. He is a controversial figure in Indian politics. His political controversies like live-streaming his entrance into the Indian parliament only come second to his 'alcoholic' image in front of the Punjabi people. However, he announced in a rally that he took a new year's resolution of sobriety in 2019.

Sukhbir Singh Badal, the son of former Chief Minister Parkash Singh Badal and the party president is its most likely CM face for Punjab. Currently, a member of Parliament from the Ferozpur, Badal also served as Deputy Chief Minister of Punjab from 2009 to 2017. With the timely exit of the SAD from the BJP alliance, starting with his wife, Harsimrat Kaur Badal resigning from the Union cabinet in 2020, the Badals are shielded from the haunting of the farm laws, which wreaked havoc in Punjab, and in the entire country.

(The above story first appeared on LatestLY on Jan 20, 2022 01:22 PM IST. For more news and updates on politics, world, sports, entertainment and lifestyle, log on to our website latestly.com).