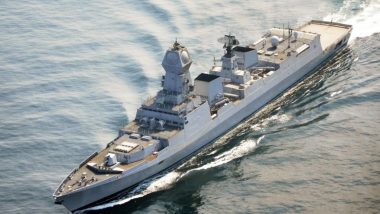 Kolkata, July 29: The Indian Rafale contingent established contact with Indian Navy warship INS Kolkata deployed in the Western Arabian Sea. The audio of the conversation between bases has been released by ANI. The Indian Navy welcomed the Rafale to the Indian Ocean. The first batch of five Rafale fighter jets to arrive at Ambala airbase in Haryana tentatively at 2 pm today.

The five Rafale fighter aircraft will receive a 'water salute' on its arrival in Ambala. IAF chief Air Chief Marshal RKS Bhadauria will receive five Rafale jets that will land at the Ambala airbase on Wednesday for induction. According to the IMD weather forecast, the weather in Ambala today would remain cloudy with occasional rains.

Ahead of its landing, Section 144 was imposed in four villages closer to Ambala airbase. Gathering of people on roofs and photography during landing has been strictly prohibited. Rafale Fighter Aircraft to Be Given Water Salute After Landing at Ambala Airbase in Haryana Today.

Once the aircrafts land in Ambala, the pilots led by Group Captain Harkirat Singh would meet the Air Chief and brief him about their flying and training in France.

(The above story first appeared on LatestLY on Jul 29, 2020 01:46 PM IST. For more news and updates on politics, world, sports, entertainment and lifestyle, log on to our website latestly.com).