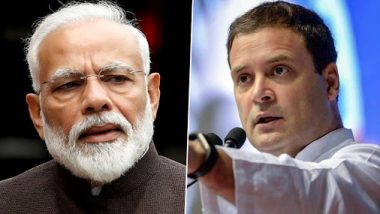 New Delhi, July 13: Upping the ante against the BJP-led Central government over the India-China border face-off in Ladakh, former Congress President Rahul Gandhi on Monday took a swipe at Prime Minister Narendra Modi indirectly accusing him of lying asleep and the nation paying the price for the same.

"He's 'lying' asleep. And India is paying for it," Rahul Gandhi said in the tweet attaching a news report.

India and China were engaged in a bitter face-off in Ladakh's Galwan Valley after 20 Indian soldiers, including an officer, were killed by the People's Liberation Army (PLA) troopers on June 15. Rahul Gandhi's remarks came amid reports of the second round of talks with the Chinese authorities on the disengagement at the LAC in the Pangong Lake and Depsang areas in eastern Ladakh.

The government had announced on Thursday about the second round of talks with China.

The delegates of both countries will discuss the withdrawal of tanks, artillery and additional forces from the forward positions. "The next meeting of the Working Mechanism for Consultation and Coordination on the India-China border affairs is expected to take place soon," the External Affairs Ministry had announced.

(The above story first appeared on LatestLY on Jul 13, 2020 04:27 PM IST. For more news and updates on politics, world, sports, entertainment and lifestyle, log on to our website latestly.com).